May 6th is National Tourist Appreciation Day. Liberty Hall Historic Site (LHHS) is a favorite stop for folks who visit Frankfort and we are grateful for every one of them. In these days of non-travel, I thought I would share a story of Brown family members being tourists. Although travel is quite a bit different now than in the early 20th century, the experiences of tourists are universal.

Mary Yoder Brown Scott (1841-1916), granddaughter of John and Margaretta Brown, traveled to Europe with her niece, Lillian Mason Brown (1859-1924), in 1908. Their adventures are chronicled in a series of letters that Mrs. Scott wrote to family in Frankfort. Transcripts of these letters are on file at LHHS.

Despite her many comments about being a frail old woman (she was 67 years old), Mary Yoder Brown Scott covered a lot of territory on her trip to Europe. After a long, hot, and dusty train ride from Kentucky to New York City, Mrs. Scott recounted her visit with family until she and Lillian set off on their journey sometime around February 1.[i] Unfortunately the next letter we have is from Madeira, Portugal dated February 8 leaving us no record of their trans-Atlantic trip.

After shore visits to Madeira (“mysterious island with. . ., its deep ravines filled with mists and the white villages dotted everywhere was a fascinating sight.”),[ii] Cadiz (“the narrowest streets I have seen”), and Algiers (“the Governor’s Palace. . .very interesting with tiles and woodwork of carved cedar tinted in colors”)[iii] Mrs. Scott and Lillian disembarked in Italy around February 16th for a three-month stay.

Mrs. Scott worried that she and Lillian might not get along but she comments to her sister, Margaretta Barrett that “Lil and I are both well and are taking good care of ourselves—we are shaking down together and will be very congenial, I think. I find she does not know everything and am at last beginning to think a little for myself.[iv] 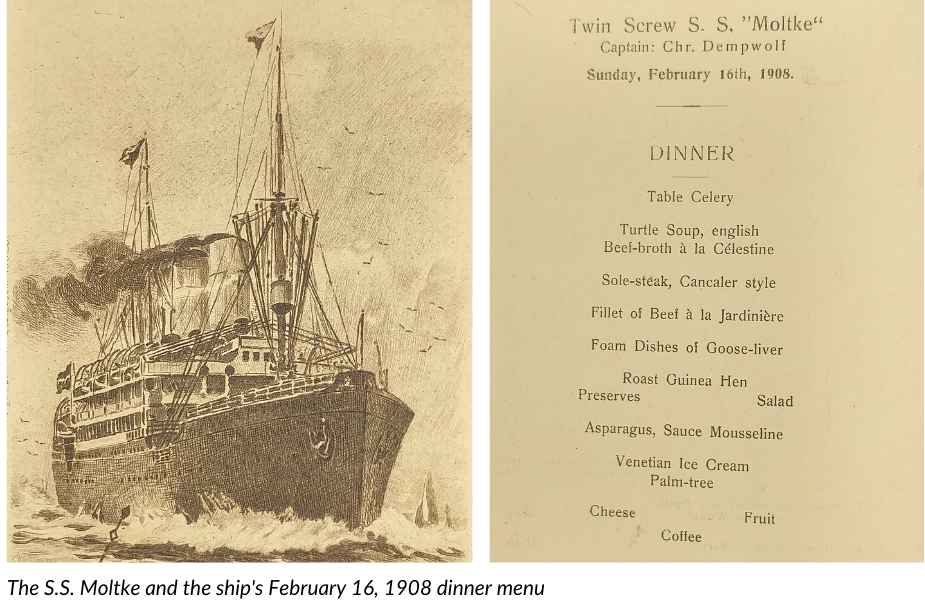 In fear of forgetting details of her experiences, Mrs. Scott fills every letter with the activities of the day. From morning until evening, Mrs. Scott and Lillian are touring, eating, and meeting people they know from home or from “The Moltke,” the ship they sailed on. Because it is impossible to describe all of their adventures in this blog, I will share some of my favorites.

After their initial stop in Genoa, Mrs. Scott and Lillian took a side trip to Nice, France. There Mrs. Scott tried her hand at gambling at a casino called The Palais de la Jetée or the “Jetty” as she called it. “I went to the Jetty yesterday & gratified my curiosity about gambling. The Jetty is a high pavilion built out over the water—As handsome & brilliant as it can be made. A long row of tables with the wheel in the center. You can play a franc and it is curious to see the long lines of people making their play—I played once for myself and once for Eliza, and lost promptly—Will try next at Monte Carol—Don’t tell on your frivolous mother.”[v] 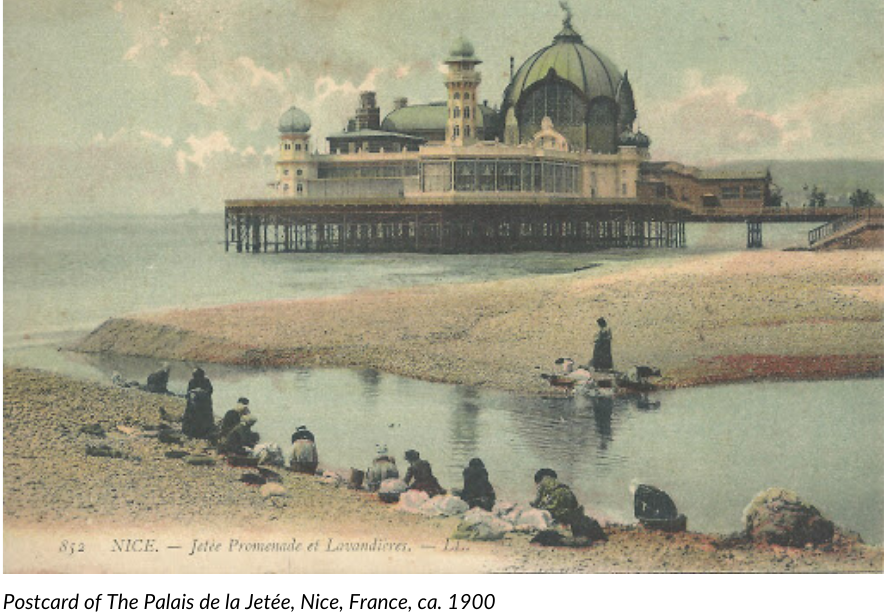 In a letter dated March 4, Mrs. Scott describes her visit to Mount Vesuvius. “At 12:30 we went to Cooks [a travel agency] and started for Vesuvius—Quite a drive there on an electric car & then on the inclined plane, then we reached the place for the ascent. There were two old ladies and only two sidesaddles.

“The other old lady got the best horse & saddle so this one declined hers and took a chair borne by three men—one in front and two behind. Had to pay $3.00 for it—up and up we went. The men only stopping occasionally to rest. Oh it was wonderful. On a narrow path overlooking steep mountain slopes of rock & sand. The views so beautiful that I quite forgot to be afraid . . . . But when we reached the place where one had to walk to the edge of the crater I decided to stop till Lil had come back.

“Some came hurrying back & told me the crater was full of steam from the rain of yesterday and it was fortunate I had not attempted it. I walked back a good part of the way leaning gently on the arm of one my bearers.

“It was quite cold and we were chilled when we got to the hotel. Lil took some hot whiskey & I meant to take some camphor pills but forgot it—I feel fine, the mountain air was so refreshing.”[vi]

On her visit to Venice in May, Mrs. Scott writes to her daughter, "Dear Mame, [d]o you know the old lady who is amiably doing the Venice street schtick viz. feeding the pigeons of St. Mark? William Glasgow Carson took it with his little camera—isn’t it fine? . . .Lil says I have gone one better than your Aunt Margaretta for she hasn’t a pigeon picture of herself.”

In the same letter, Mrs. Scott writes, “I am very tired of the food over here tho’ it is very good & plenty of it—But I would like to say ‘Sadie [one of the servants at Liberty Hall] bring in some hot biscuit & some more broiled tomatoes.’  And to Annie [another servant] ‘be sure to have some of your good corn cakes for breakfast.’ I suppose I should not be thinking of such things when I am in Venice.”[vii]

Mrs. Scott and Lillian visited many other cities on their grand tour of Europe and although she grew weary, she said, “. . . neither time nor money allow me to stop sight seeing.”[viii] After a visit to England, Mrs. Scott returned to Frankfort in July while Lillian continued her travels through Great Britain.

What a wonderful journey Mrs. Scott had, one of many trips she took both here in the United States and in Europe. Touring “the continent” was de rigueur for people of means and Mrs. Scott and Lillian took full advantage of their opportunity.  In reading her letters we can share the feelings she expressed when describing Michelangelo's David--"isn't it splendid"!