The chair form was familiar.  Especially the front leg turnings, which were a variant of those on a fancy settee that has always furnished Liberty Hall (Figure 1), and another settee that was first owned by Dr. Nicholas Warfield (1786-1863) of Fayette County (Figure 2).  The Brown family settee was painted vermillion red with a selective black overcoat yielding a red and black tiger-striped effect, and stenciled decorations in chromium yellow and gold leaf. Like some of the attic chairs, the Brown settee shows heat damage, but is still in fine condition and retains its original cane seat.

The Warfield settee is painted vermillion red with three, free hand, still life paintings of squash, pears, grapes and wheat on the crest rail, and stenciled floral designs on the shaped medial rails. Both the paint and rush seat are original. It was once one of a pair of settees along with a set of similar side chairs that descended in the Warfield family.[i] 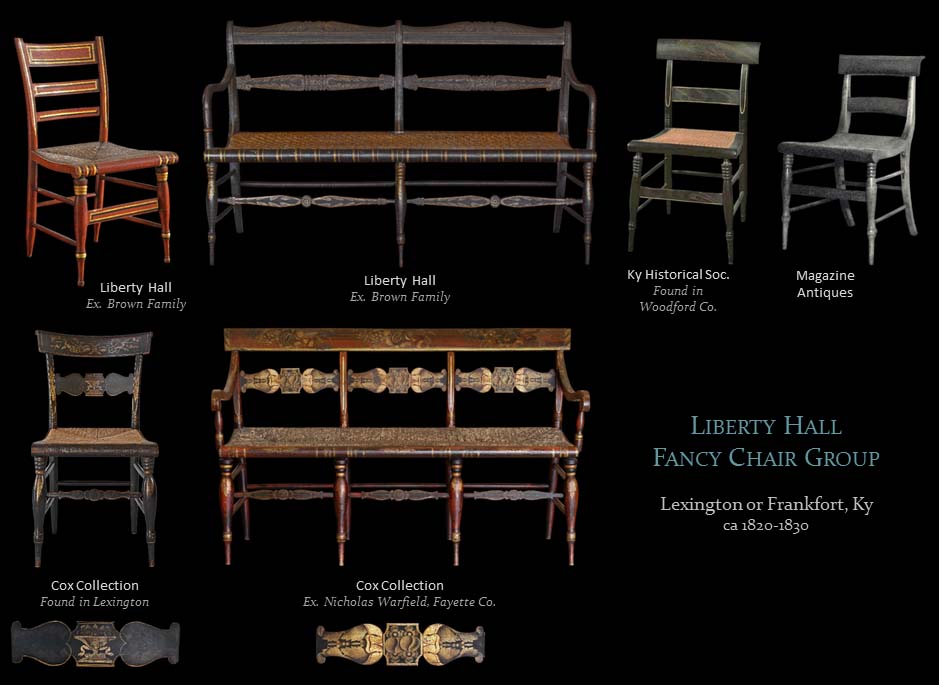 The Brown and Warfield settees are members of an emerging Kentucky shop group called the Liberty Hall Fancy Chair Group (Figure 3). The unknown shop, likely located in Lexington or Frankfort, worked from about 1820 to 1830.  Another member is a chair imaged in a 1941 Magazine Antiques article that said the form was “traditionally ascribed to... William Reed in Lexington.”[ii] However, Reed is unlikely as he was a generation earlier,[iii] and listed himself only as a “Windsor chair-maker” in the 1818 Lexington directory.[iv] Other possible members include a chair found in Lexington that is closely related to the Warfield settee and a set of 12 chairs at the Kentucky Historical Society.

Figure 4. Similarities among all the chairs above illustrate the strong influence of styles from the coastal cities of Philadelphia and Baltimore on the Liberty Hall Fancy Chair Group in Kentucky.

Liberty Hall curator Kate Hesseldenz checked the site’s files, which recorded the attic chairs as a 1973 purchase, indicating they were not Brown family pieces. I revisited my own files finding both the Brown settee and an attic chair were in a Kentucky chair exhibit in 2006 at Shaker Village of Pleasant Hill. Andy Anderson and Marianne Ramsey were the guest curators who attributed the Brown settee to the Kentucky Penitentiary, perhaps due to its continuous arms that are like some penitentiary chairs. However, continuous arms were widely used in America and Europe and are not unique to the penitentiary. While the penitentiary produced more sophisticated chairs from 1810 to 1840,[v] the design influence was apparently Italian, whereas the fancy chair group is influenced by Baltimore or Philadelphia (Figure 4), so much so that the maker likely worked in one of those cities prior to Kentucky. Thus, I do not believe that the Brown settee was a penitentiary product. 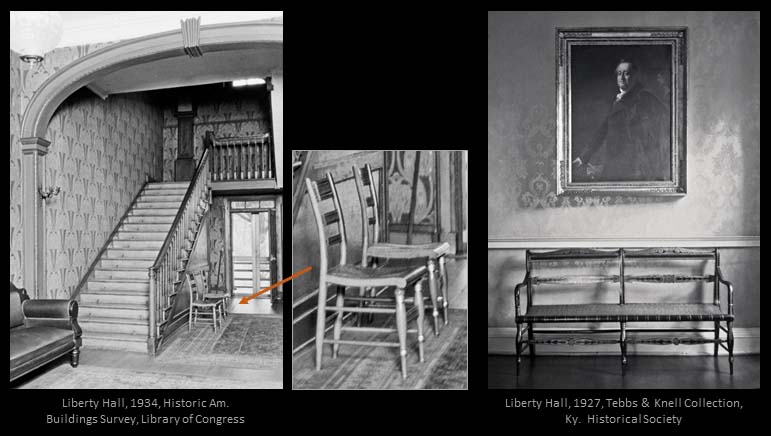 Figure 5. Historic photographs dating 1934 (left) and 1927 (right) prove that both the settee and the attic chairs furnished Liberty Hall while still in the Brown family and thus are Brown family pieces.

I also reviewed interior photos of Liberty Hall taken prior to 1935, while the Browns were still in residence (Figure 5). The Brown family settee appears in a 1927 photo below a portrait of Dr. Samuel Brown. Surprisingly, two of the attic chairs appear in a 1934 photo of the entry foyer. They have the same paint scheme and are clearly the same chairs. Did the chairs leave the house after 1934 and then get purchased back in 1973 or were they in the house the whole time? Kate felt that the 1934 photograph showing the chairs in the Liberty Hall first floor hall was compelling evidence to suggest that the record was incorrect.[vi] The chairs are almost certainly Brown family pieces.

So Kate and I, along with Sharon Cox experienced a GREAT Kentucky EUREKA MOMENT during our recent Liberty Hall attic excursion. We rediscovered Brown family furniture and returned early and important provenance to a magnificent set of six Kentucky painted fancy chairs in remarkable condition.

[v] A circa 1820-1830, Kentucky Penitentiary, continuous armchair in the LHHS collections can be compared directly with the Brown family settee and attic chairs.

[vi] There is another set of six fancy chairs in the LHHS collection that have been presumed to be Brown family pieces, however with this new discovery it is likely that they were the set purchased in 1973.