Oh What Responsibility Rests Upon Me! Margaretta Brown and the Frankfort Sabbath School for Girls

In a shady corner of the Liberty Hall garden, there’s a stone bench with an inscription on the seat. Its age makes it hard to read, but the words represent an important aspect of the life of Margaretta Brown.

The 1810 date in the inscription may refer to Margaretta’s suggestion that a boys’ school formed in Frankfort that year provide religious instruction on Sundays. But there is more extensive evidence of her involvement in the Presbyterian Sunday school for girls that opened in March 1819. The church had no building, so classes met in the homes of organizers Elizabeth Love and Margaretta Brown. Within a few months, there were forty students and five teachers, supervised by Margaretta.[i]

In a November 1819 letter Margaretta wrote that “Our Sunday School comes on finely” and described the classes and teachers. She also boasted about the hundreds of verses some of the students had memorized. “When we recollect that these girls go to school five days of the week . . . I think I have every reason to be satisfied with their industry,” she wrote, noting that the boys’ school “does not succeed so well.”[ii]

In the early years, students learned Bible verses, hymns, and the answers to catechism questions. Margaretta’s books, letters, and account book reflect the addition of publications written especially for Sunday school students and teachers. A library she helped to create contained 487 books and journals by 1828.[iii] She also wrote materials herself, including Food for Lambs, a children’s dictionary of religious terms. 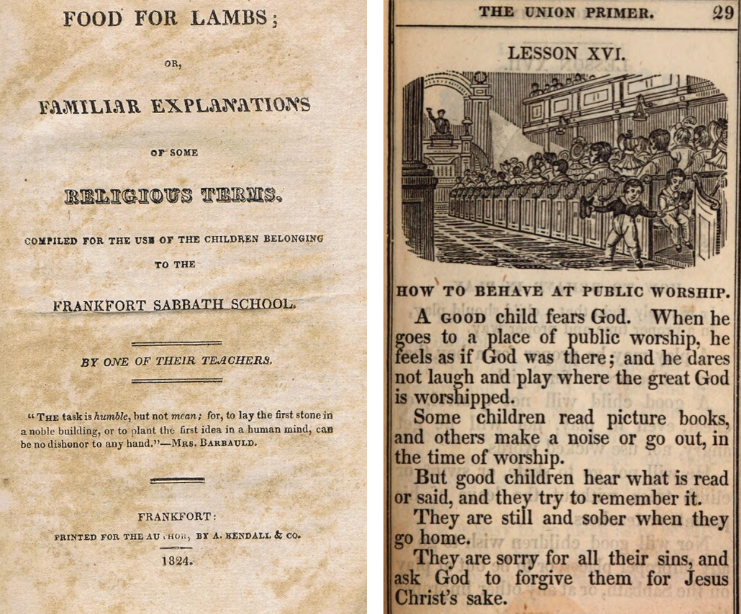 As the school’s superintendent, Margaretta also kept financial records and wrote reports on the school’s successes and shortcomings. An 1828 report noted that 79 students recited a total of 80,691 verses and earned 338 awards. In 1831 Margaretta expressed her frustration with parents “who are much more anxious that their children should advance rapidly in the acquirement of worldly science, than in the knowledge of those things which belong to their eternal salvation.” A year later, she fretted that only two of her almost 100 students had joined the church.[iv]

Born in 1772, Margaretta Mason came of age when post-revolutionary thinkers were urging women to support the new nation by preparing their sons to be good citizens. Former LHHS archivist Morgan Lockard has argued that Margaretta exhibited some of the qualities of “Republican Motherhood” in seeing to the moral education of her children.[v] In 1818 she told her son Orlando that she had stressed his religious instruction because “I wished your mind to be stored with precepts, which are calculated to make you wise for time and eternity.”[vi]

The religious revivals of the early nineteenth century led to new opportunities for women to offer moral instruction outside their homes. Before this time, women’s religious lives centered on attending worship services. The growing belief that mothers were the spiritual nurturers of children led to their wider participation in religious education.[vii] 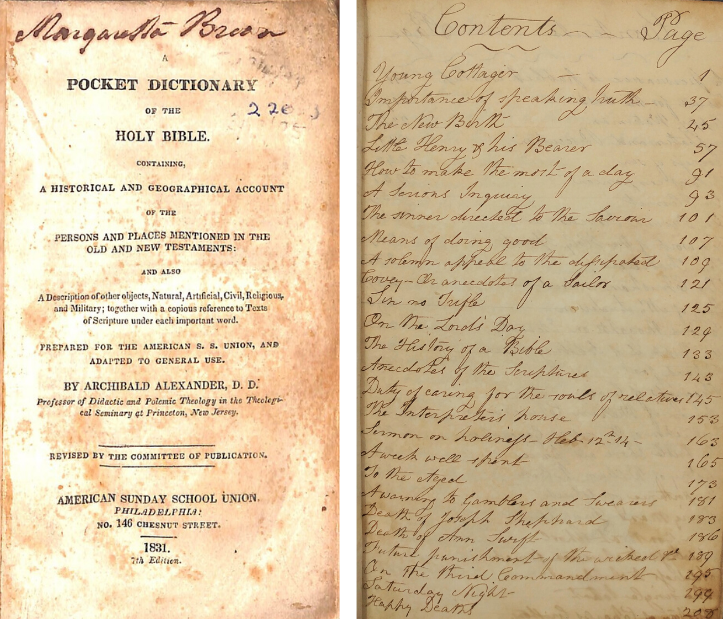 Title page from A Pocket Dictionary of the Holy Bible (1831) and Margaretta Brown’s handwritten table of contents of religious tracts collected by her (1819-1822), Liberty Hall Historic Site Collections.

The “True Womanhood” ideal that originated around 1820 espoused the virtues of piety and purity and emphasized women’s spiritual roles. Margaretta’s writings reflect her growing acceptance of this thinking.[viii] In a long letter to “My dear Girls” in 1822, she urged her students to attend church, honor their parents and be chaste, honest, and humble.[ix]

In her study of three Presbyterian women leaders in the Sunday school movement, Page Putnam Miller writes that Margaretta Brown’s involvement followed a typical pattern. Her educational background and social position helped her to mobilize the religious community. But in running a small school in a small town, she was one of the “organizational footsoldiers” who helped the Sunday school movement to succeed.[x] As Margaretta wrote to a niece in 1832, “I have 106 girls under my superintendence – Oh what responsibility rests upon me!”[xi]

Margaretta was active in the Sunday school until the year of her death, 1838. A niece wrote that the Sunday school students, wearing mourning badges, marched in the funeral procession.[xii] Many years later, Frankfort’s First Presbyterian Church honored Margaretta Brown with the bench still in the garden today. Her great-granddaughter Mary Mason Scott described the dedication in a June 13, 1926 diary entry:

“. . .at four the exercises were held at the church – We slipped out to be here to receive the Sunday School – Rosa III stood up behind the seat which was covered with a flag – Agnes Todd McDaniel held the wreath while Rosa unveiled the seat – which Mr. Sutterlin presented – John replied accepting for Margaretta Brown’s descendants – Apple tree planted by the boys – Then ice cream cones for every one – after Rebecca spoke and Dr. Pelgrim prayed – A beautiful celebration –“[xiii]

In the early 19th century, women’s options for participating in activities outside the home were limited. In taking advantage of one that was available to her, Margaretta Brown made her mark on Frankfort and secured a place in American women’s history. I wonder what role she might pursue if she were alive today.

[v] Lockard, Morgan “I Never Saw a Death More Lamented Than Hers By All Classes”: Margaretta Mason Brown as a Case Study in Republican Motherhood in Kentucky.” Paper submitted to the University of Louisville Department of History (2016).

[ix] Margaretta Brown to the Girls in her Sunday School (1822). Filson Historical Society.