All the rooms on the side next Mrs. Love, including the ell are now ready for plastering and the kitchen and room above it are lathed. The passage floor below is laid and also the floors in the upper room above the drawing rooms are laid—the windows and the wash boards nearly laid down. Everything is now going on with dispatch.  Harry has his mortar prepared and will commence operations in a day or two. 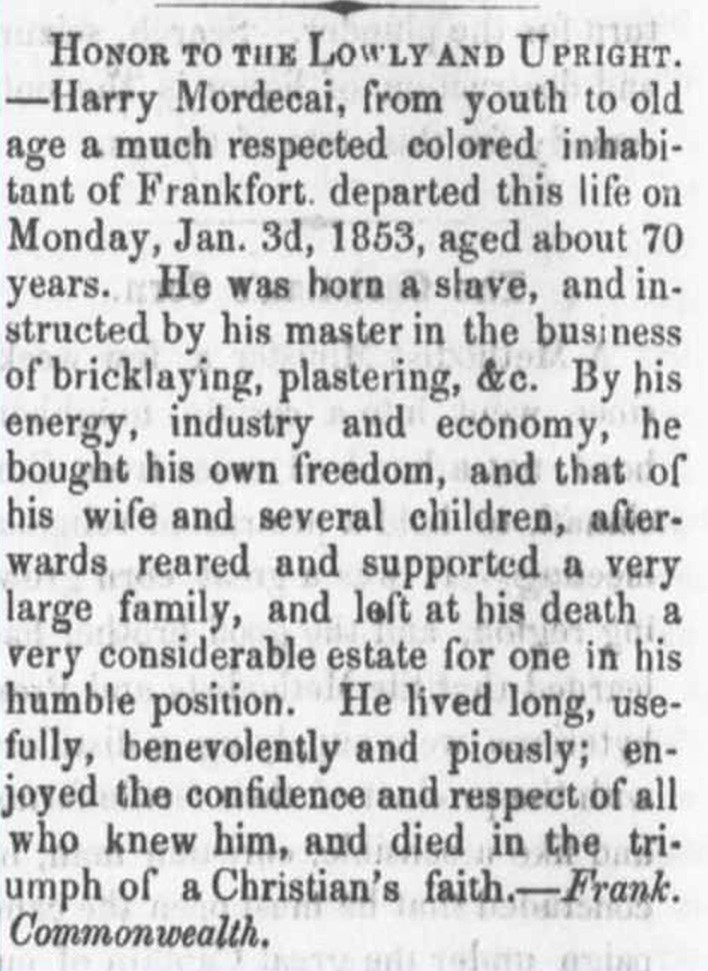 Harry Mordecai's obituary in the January 28, 1853 issue of "The Ohio Organ of the Temperance Reform" (Cincinnati, OH).I wanted to learn more.  When Gary Albert, MESDA (Museum of Early Southern Decorative Arts) Journal Editor, embarked upon a series on African American craftsmen, I thought Mordecai deserved to be included.[i]  Gary agreed and my research began.  What other structures did Mordecai help build?  Was he born free?  Some answers came quickly from his obituary published initially in the Frankfort Commonwealth.

The most telling discovery was George Radcliffe’s 1817 emancipation of Mordecai.  George notes Mordecai’s long service to him and his father, Francis Radcliffe.  Who was Francis Radcliffe?  How did Mordecai become free?  George and Harry grew up together.  Since Mordecai was a mulatto, were they half-brothers? Why is Harry’s last name Mordecai?  So many questions arose.  Some yielded answers; some remain. 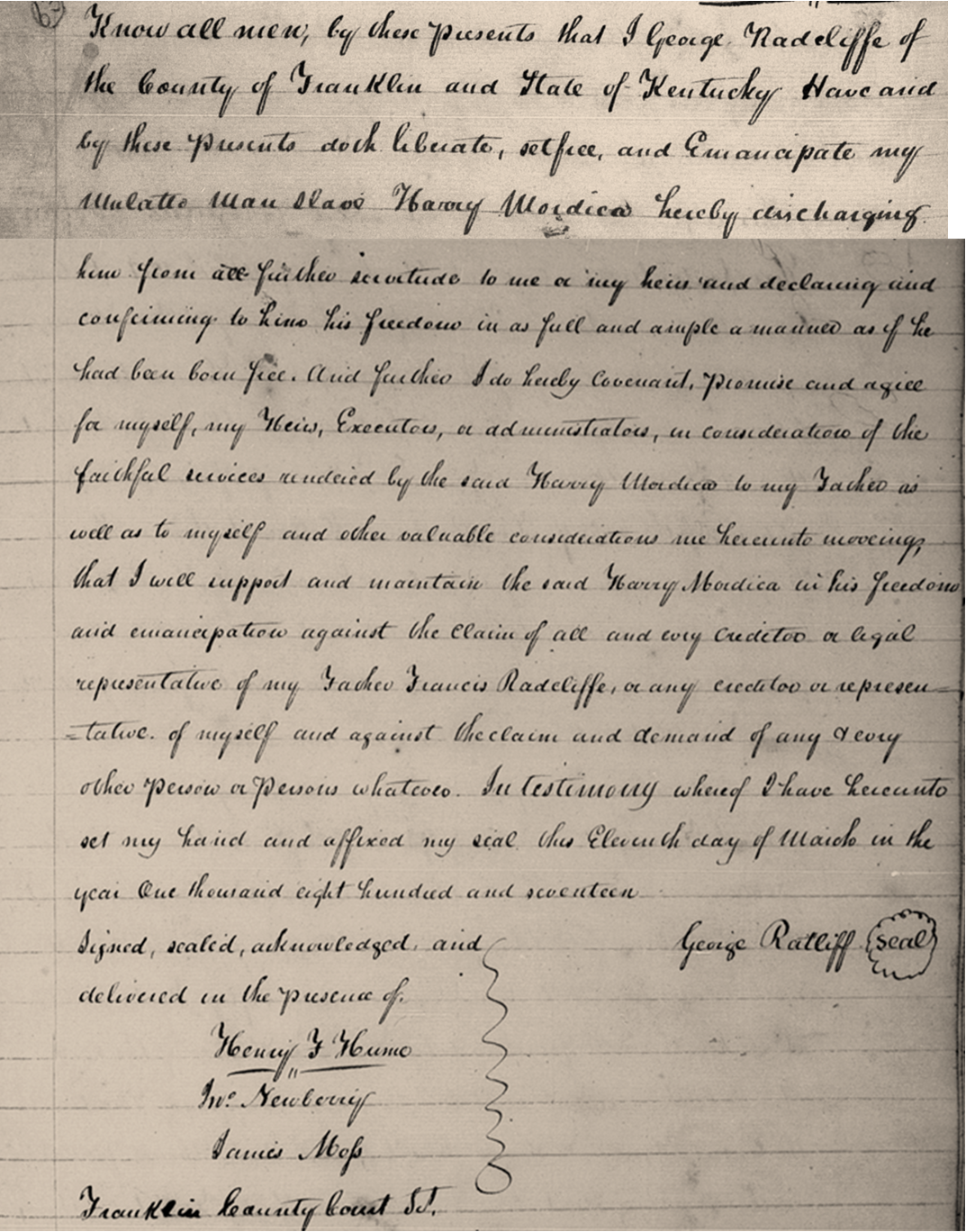 There is a Francis Ratliffe noted by Edna Talbott Whitney as a cabinetmaker who advertised removing his business in 1808[ii],. This was likely not the Francis Radcliffe in Mordecai’s story, who died in Frankfort seven years after the cabinetmaker’s relocation.

Notable for my research, LHHS Educator Vicky Middleswarth and Executive Director Sara Elliott remembered Radcliffe being referenced in the Peterson report.  Senator John Brown contracted with Radcliffe and George Rowland for Liberty Hall’s brickwork.  While there is no listing for Radcliffe on Franklin County’s 1795 tax list, he does appear on the 1796 tax list.  He may have come to Frankfort specifically to work on Liberty Hall.  Mordecai, who was 12-19 years old during Liberty Hall’s construction, likely assisted Radcliffe in making the bricks from the clay dug for the basement, mixing mortar and laying bricks.

A decade after Harry Mordecai’s emancipation, construction began on the third Kentucky capitol (called the Old State Capitol today). Although Mordecai has long been credited with doing the plasterwork, the legislature lists payments to William S. Shackleford for “all the materials, plain, and ornamental plastering, and every other claim arising out of his contract for plastering the capitol.” Journals of the Legislature document that Mordecai performed plastering work for the state before and after the capitol construction, but most payments during the construction were for other kinds of work. Why?

In December 1786 Francis Radcliffe petitioned the Virginia legislature for payment due for work he had done on public buildings but had not been compensated. Did Radcliffe tell Mordecai about the difficulty of receiving payment from the Virginia legislature, convincing Mordecai not to bid on such a large project for the legislature?  Did Mordecai do some of the work under Shackleford’s contract?  Or was Mordecai working on another job at the time, as he does not appear on the Franklin County tax list for the time when most of the plaster work was completed?  These questions remain unanswered.  However, Mordecai was fortunate, because in the 1834 Journal of the Senate an accounting of monies due as of December 1833 includes $3.25 Shackleford, Wm. (insolvent). [iii]  It seems that Shackleford’s experience equaled Radcliffe’s. Mordecai did perform plastering work for the state before and after the construction of the Old State Capitol, which is documented in the Journals of the Legislature, but most payments during construction specify work other than plastering.

Life was not easy for Mordecai.  In 1842 Frankfort’s leaders called a special census for free blacks to assess their threat to the white population.  Those found unworthy had to leave town.  Mordecai and his family were found worthy and allowed to stay.  Yet he had tremendous strength in his belief in God and lived according to biblical principles.  He was a member of St. John African Methodist Episcopal Church and held in trust the property on which the church was located. He ministered to the congregation.

Despite being born into slavery, he negotiated a path to purchase his freedom, then that of his wife, Patsey, and his children.  After Patsey’s death, he married Rachel Lewis.  Although tax records list his ownership of enslaved people, an analysis of the increases and decreases suggests that he created a path to their freedom.

Liberty Hall (on the left) and the dining room of the Orlando Brown House at Holiday Teas, 2019.

When visiting Liberty Hall, picture young Mordecai’s hands on those bricks; and picture the lathwork beneath Mordecai’s smooth plaster on the walls at the Orlando Brown House.  And when thinking of American philosopher William James’ quote “Act as if what you do makes a difference.  It does.”, think of the positive difference Harry Mordecai’s actions made in bringing freedom to many.  These accomplishments still live today.

[ii] Whitley, Edna Talbott, A Checklist of Kentucky Cabinetmakers From 1775 to 1859, p. 88 lists Ratliffe, Francis, “made a string of dining tables in the Duncan Phyfe style, extant.  He adv. the removal of his business (Mar 3, 1808, Western World).”