Among the fifty pieces of historic women’s clothing in the LHHS collection there are four early 20th century Parisian garments, three gowns and a suit.  Who in the family owned these clothes and did they travel to Europe to acquire them?  It seems that someone in the Brown family knew that Paris, France, was (and still is) the fashion capital of the world. American women who wished to be in style in the early 1900s bought French clothes.[i] 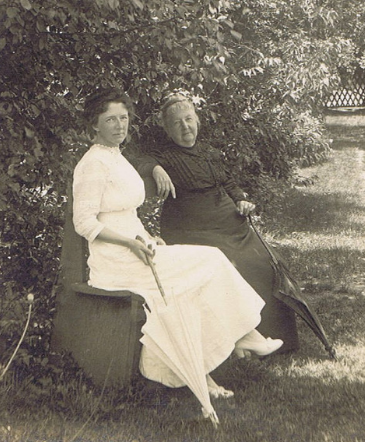 Eliza Baily, her husband J.C. Baily and Mary Mason Scott, or Mame, as she was called, traveled to Europe in 1892.  Mame kept a journal and while in Edinburgh, Scotland, she wrote that “We did some shopping and ordered our gowns from Redfern.”[ii] Redfern & Sons was a British tailoring firm and in the 1890s, they had branches in London, Edinburgh, Paris and New York. The gowns Mame and Eliza bought on this trip did not survive, but the purchases show their high-end taste as Redfern was a popular fashion house with clientele including royalty such as Queen Victoria and her daughters.[iii]

House of Worth gown, ca. 1906 and J. Worth label, Liberty Hall Historic Site Collections. Illustration of Jean-Philippe Worth from "Paris Dressmakers," Strand Magazine, 1894.

One of the French evening gowns in the collection was created by the House of Worth. It was designed by Jean-Philippe Worth and dates to ca. 1906.  Jean-Philippe was the son of Charles Frederick Worth, who established the House of Worth and is remembered as “the father of haute couture.”[iv] The gown’s silhouette is s-shaped with a high waist and train.  It is made of satin with net overskirt and lace with sequin trimmings and applied silk roses on the bodice and bottom of the dress. The waistband, sleeves and bow on the back are made of pink satin.  Mary Yoder Brown Scott traveled to Europe in 1908 and it is possible that this dress was purchased on that trip, either for herself or for her daughter, Mame.

A French suit in the collection may have been ordered during a trip to Europe.  Mary Mason Scott and her mother visited Scotland, England, Holland, Belgium, and France in 1911. Mame  kept a travel journal and while in London wrote, “Shopping in the morning; ordered suit from C. Cumber, 61 Fleet Street….”[v] This could be the French suit in the collection, even though she purchased it in England.  A feminine and sleek day dress made of corded grey silk, this suit has four pieces: a long jacket, a black satin vest, a long skirt with black satin underskirt, and a belt.  It was made by the House of Chéruit.  Madame Louise Chéruit began as a dressmaker but transitioned into a fashion designer and became one of the first women to control a major French fashion house. [vi]  Another House of Chéruit garment in the collection is a gown from 1910-1920.  It is a cream silk dress with lace and silver and gold beading.  A popular and versatile designer, Louise Chéruit was not only known for her evening gowns but also for her sophisticated day wear. 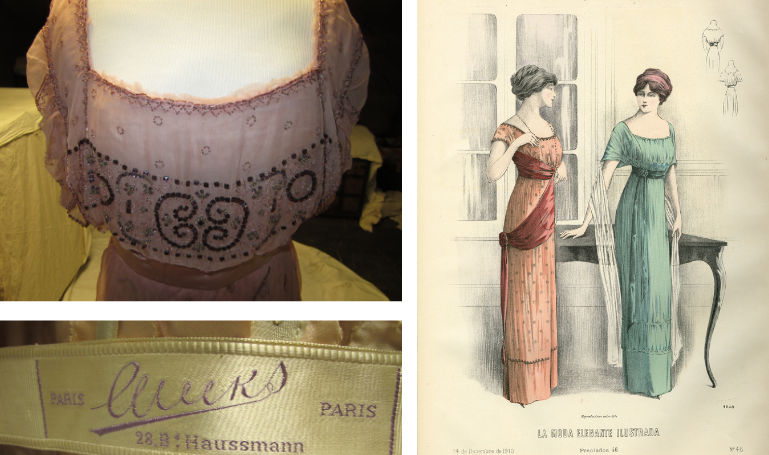 Weeks gown and label, 1910-1915; La Moda Elegante Ilustrada fashion plate, 1910 (Fashion Institute of Technology), showing women in similar dresses.While in Paris in 1911, Mame wrote that, “Mother spent [the] day with Mrs. Ames shopping. I do some shopping.”[vii]  It is possible that she purchased the Weeks dress (1910-1915) in the collection during this shopping trip.  This elegant dress’s silhouette is column-shaped with a low décolletage and low-cut drape in the back.  It is made of pink silk and chiffon and adorned with beads and rhinestones. This dress harkens back to the high-waisted column dress of a century earlier, the Empire gown.[viii] Like the other two evening gowns discussed above, this dress, too, is pastel in color and there is quite a bit of embellishment.

The early 20th century Parisian gowns in the collection were at the height of fashion at the time because of their use of neutral colors and materials such as silks and chiffons and lavish trimmings. [ix]  Likewise, the French suit in the collection, would have been highly stylish with its long tunic-like jacket worn over an ankle-length skirt. [x]

An old tag on the Chéruit suit identifies Mame as the owner and Eliza Baily’s name is associated with several fine gowns in the collection (although not the ones mentioned in this blog).  If Mame was the owner of the remaining three dresses, she certainly was a style-conscious person.

[vi] Westfahl, Gary, A Day in a Working Life: 300 Trades and Professions through History (2015): ABC-CLIO, California.