When my husband, Warren, and I were asked to join the Liberty Hall Historic Site’s Collections Committee, we never dreamed it would result in finding a treasure.  Our first assignment, to evaluate a standing plate warmer, was interesting, but not exactly in our area of expertise. Since our area of expertise is Kentucky antique art, we asked, might there be a print we could evaluate?  The answer was yes.

The picture, in a Liberty Hall storage area, had been identified as an “oleograph” or chromolithograph.

Using only the small photo attached to the picture’s collection record we really couldn’t tell much about it. We sent an image to Robert Newman who runs the Old Print Shop in New York. He told us that 1) he had never seen that chromolithograph (and he felt he would have), 2) if it had been printed, it would have taken about more than 20 stones to accomplish and 3) OMG, what a frame! Nobody would put a chromo in a frame like that. It would cost roughly $25,000 to replicate such a frame these days.

We needed to see the actual picture. So, we made a date with Liberty Hall curator Kate Hesseldenz.

Our immediate impression was that it was not a chromolithograph. Examination with magnifiers appeared to confirm that feeling. We also concluded that it dated from the last half of the 19th century. Warren posited that the artist was Kentuckian and Civil War veteran Samuel Woodson Price.  We started researching.

Following the Samuel Woodson Price idea, we picked up our copy of Kentucky author and historian J. Winston Coleman’s 1974 book Three Kentucky Artists, one of whom was Price. The Price chapter almost immediately yielded the following paragraph:

This series of paintings struck the popular fancy, received most favorable comment, and added to the already high reputation of the Lexington artist. Another group portrait, or figure composition, done in this period deserves mention: the scene titled Night before the Battle of Chickamauga. This painting, which is owned by the present author, is a 5’ x 8’ canvas, representing three military figures around a bright campfire with the moon shining faintly in the upper right-hand corner. General Thomas is seated on a campstool with a large campaign map spread out on a tree stump. He is discussing the morrow’s battle, while his faithful aide-de-camp, Colonel Willard, quietly listens and gazes into the fire. An orderly standing nearby with rifle in hand is the third member of the group.[i]

Could this be the same painting now owned by Liberty Hall?  A plaque adhered to the LHHS picture reads: “Thomas / Sunday Night at Chickamouga [sic] / 20th Sept. 1863.”

The title is close enough and the description matches. However, the Liberty Hall picture is, roughly, 2 1/2 by 3 feet. Had it been cut down? What was going on?

Meanwhile, Kate found a pamphlet from 1892 advertising two oleographs of paintings by “General W.S. [sic] Price, of Lexington, Ky.” The Henderson-Achert-Krebs Lithograph Co. of Cincinnati, Ohio, sold General Geo. H. Thomas, the night before the battle of Chicamauga [sic] and Portrait of General Geo H. Thomas in Uniform prints.[iii] The size of the Chickamauga print is given as 22 by 28 inches, and the scene presented has minor differences with the larger Liberty Hall picture. The Thomas portrait looks like a small print version of the oil painting owned by Special Collections and Archives, Transylvania University, Lexington. 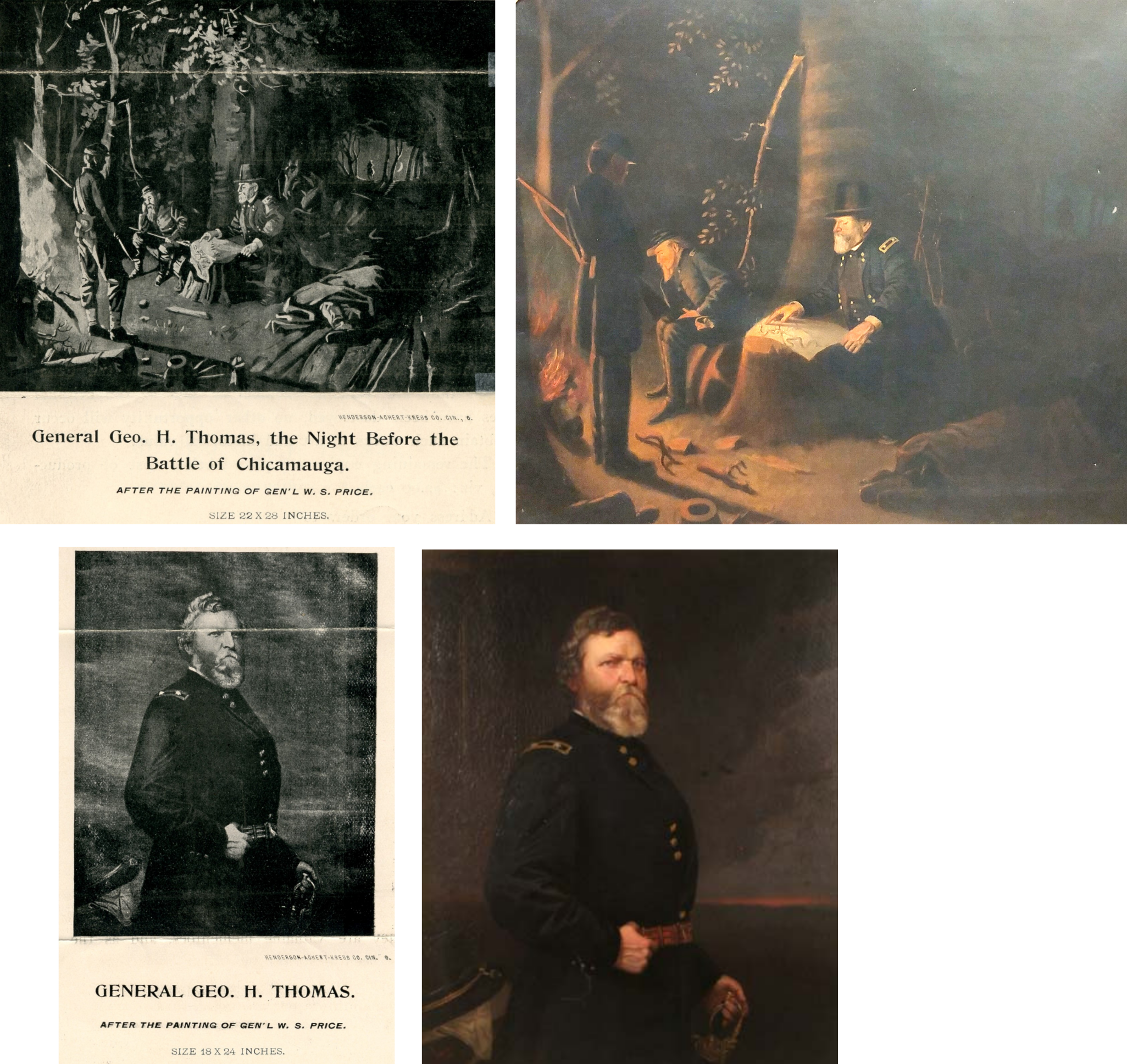 We felt sure that fellow collections committee member Jim Birchfield who previously worked as the Rare Books Curator at the University of Kentucky Special Collections Research Center, would have known J. Winston Coleman and perhaps had been to his Lexington home. Birchfield told us he had visited and remembered seeing a similar painting, but perhaps smaller than 5 by 8 feet and in a different frame. Birchfield referred us to B.J. Gooch, a former Special Collections librarian from Transylvania University, who had handled the Coleman estate acquisition for Transylvania University in Lexington. Coleman died in 1983.  Gooch had never seen the Chickamauga painting and referred us back to Birchfield!

So here we are. Well-known Cincinnati painting conservator Terry Boyle came to Liberty Hall to examine the Chickamauga picture and supply an estimate for the cleaning of the picture and the restoration of the elaborate patriotic frame. Boyle believes the picture to be a painting and confirmed our thinking that the painting had not been cut down and that it could have been painted while Price was working. Price was seriously wounded in 1864, ending his Civil War service, and he went blind in 1881. General Thomas died in 1870, and there was a demand for images of the war hero. 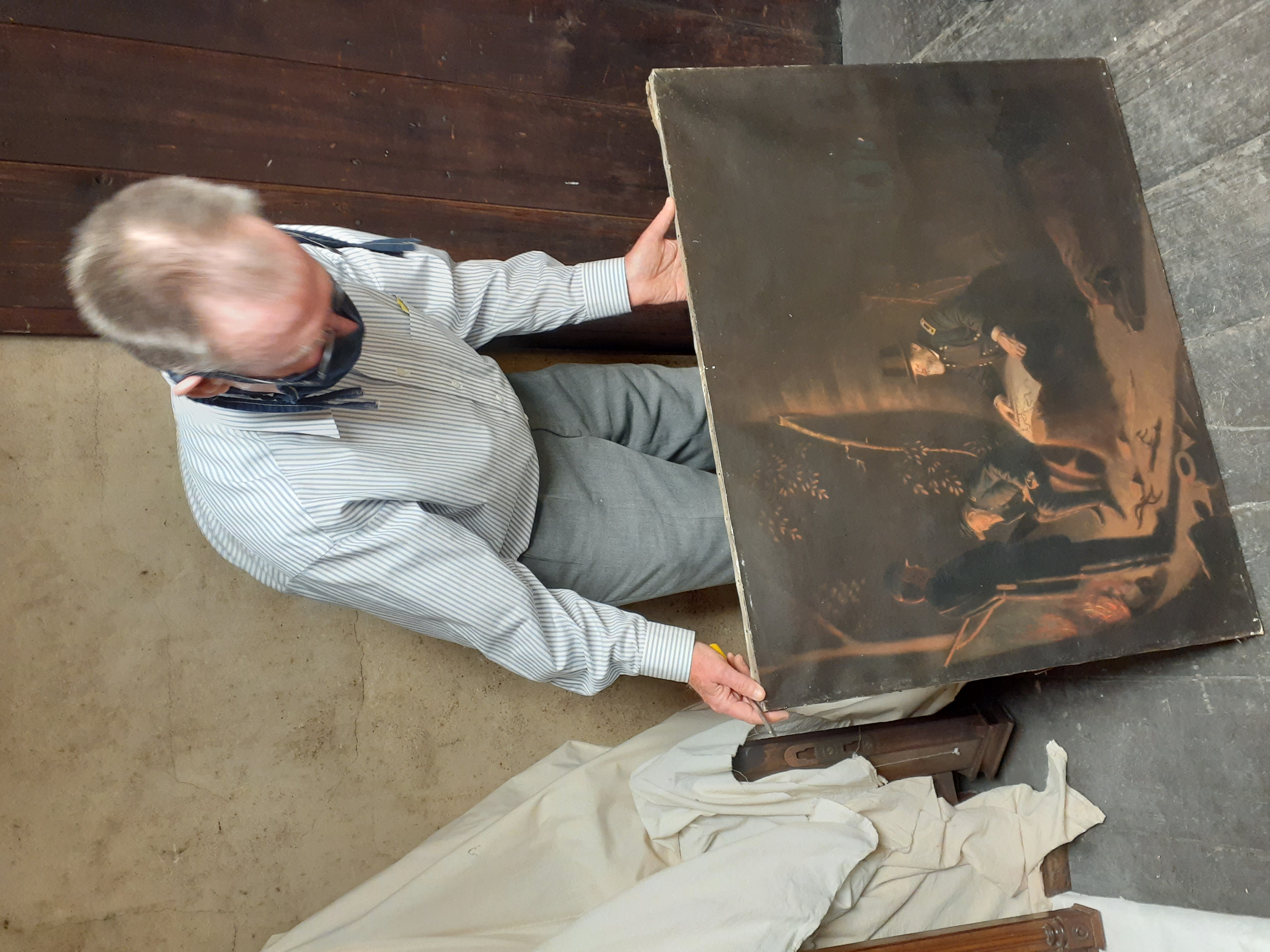 Boyle also supplied an intriguing fillip to the story. He was working on a Carl Christian Brenner painting in the Filson Historical Society collection and recognized the Brenner frame, made by the J.V. Escott company of Louisville, as being basically the same as the Chickamauga painting frame. The Escott and Lindsay companies were big frame makers in Louisville in the 1870s and 1880s. Boyle thinks the Chickamauga painting’s frame is an Escott.

Is the picture J. Winston Coleman’s painting? Was Coleman’s painting really 5 by 8 feet? A painting that large wouldn’t have gone unnoticed. We searched the Smithsonian Institution American art records and Newspapers.com to no avail. We contacted the Chickamauga & Chattanooga National Military Park., and the historian there had never heard of it. Another dead end involved the Frick Collection in New York City. Around 1937, according to local newspaper reports, the Frick sent experts to photograph “choice items” from a collection of Kentucky art put together by the woman’s clubs and the University of Kentucky. The Frick Collection’s Price file documents his paintings of President Millard Fillmore and Kentucky Gov. Robert Fletcher but nothing about Chickamauga.

At this point, we are reasonably certain that Samuel Woodson Price was the painter. It is the kind of thing he did. He worked in the area. He had a connection to the subject.

The Brown family had a connection to the subject, too, but there is no record of the painting being in their household. William T. Scott (1833-1875) who married Mary Yoder Brown (1841-1916) served in the Civil War as a Union Army Lt. Colonel in the 3rd Kentucky Infantry Regiment. He fought in the Battle of Chickamauga in Georgia which was the largest Confederate victory in the Western theater. Liberty Hall Historic Site owns a portrait of Scott painted by Samuel Woodson Price. Scott would have known General Thomas, is he the reason the painting ended up at Liberty Hall?

The questions of when, how, and why the painting was acquired by Liberty Hall Historic Site continues to mystify us.  Kate Hesseldenz reported that the picture didn’t appear in Liberty Hall inventories until 1986, but it could have been in the collection prior to that date. She could find no reference to it after going through all the Site’s board of directors’ meeting minutes and available correspondence from 1974, when Three Kentucky Artists was published, through 1992, when Coleman’s widow passed away. Maybe somebody out there knows something?

If the picture previously belonged to J. Winston Coleman, that makes it all the more interesting. Perhaps someone out there remembers how the picture got to Liberty Hall or can remember seeing it in the Coleman home?

Wherever the picture came from, it is an important work by a significant Kentucky artist. Late 19th century genre paintings such as this are rare, portraits are more commonly seen.

Plans to display the painting are now in the works, but it must be restored first.

If you would like to support Liberty Hall Historic Site, please consider a donation.