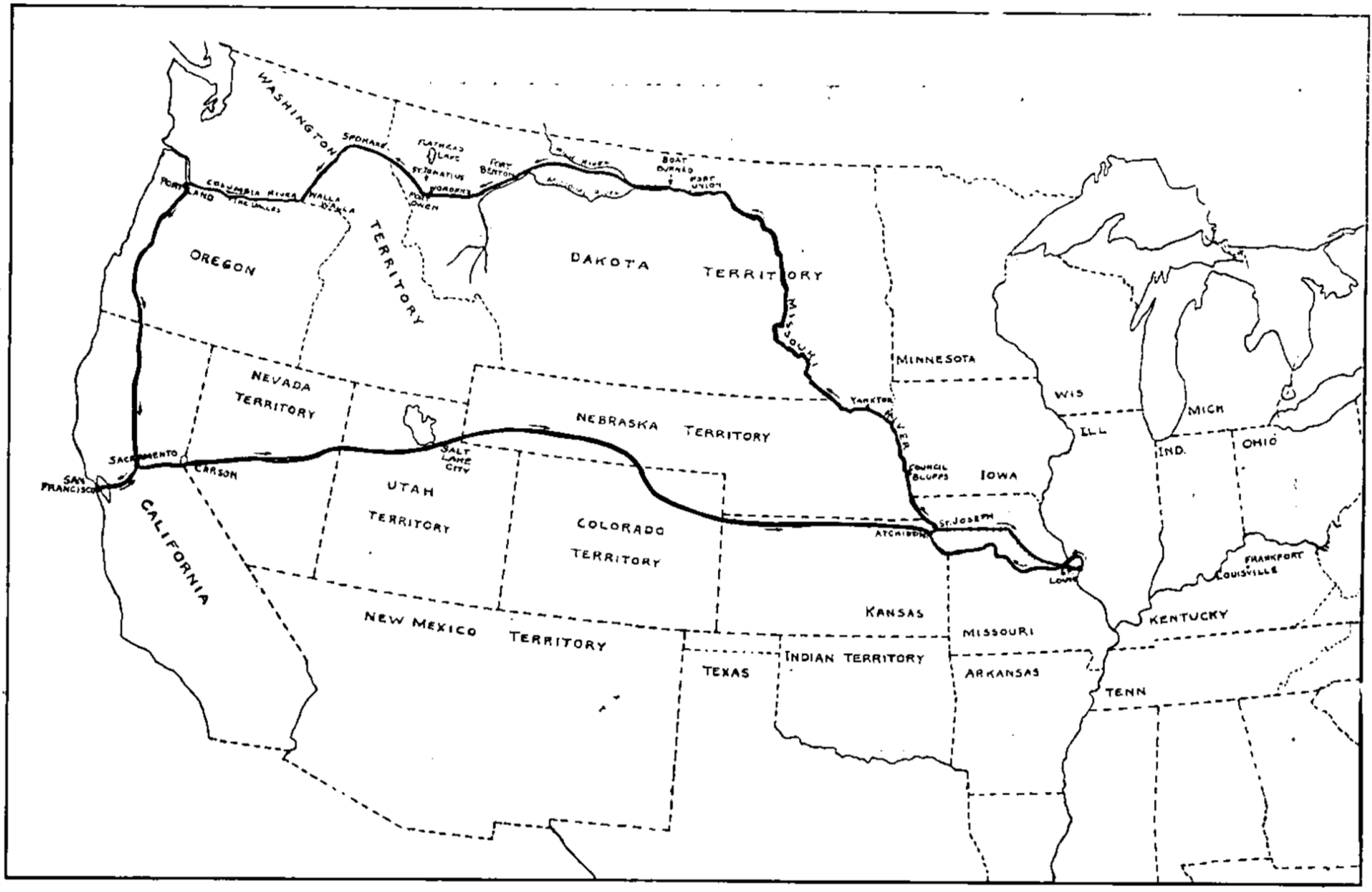 Map showing the route taken by John Mason Brown on his trip to the Northwest in 1861, The Filson Club History Quarterly, 1950.

John Mason Brown, the son of Mason and Mary Yoder Brown, was born at Liberty Hall in April 1837. A graduate of Yale, Brown taught school in Frankfort, worked for the Kentucky Geological Survey, studied law and shortly after being admitted to the Kentucky bar, followed his half-brother, Benjamin Gratz Brown, to St. Louis in 1860.

Brown was interested in history, geology, geography, and languages. Therefore, it is not surprising that the lure of the west—the west that Lewis and Clark had seen a little over 50 years before—would lead him on a six-month adventure that, fortunately for us, he chronicled in his diary.

He recorded his daily experiences from May to November of 1861 and noted the beauty of the natural features, the conditions of the towns/forts that he visited, and the quirky personalities of people he met along the way—several of whom were from Kentucky! He often wrote of the Native Americans he encountered along the way, learning the sign language of some of the tribes. He even started compiling a dictionary of the Blackfeet dialect. 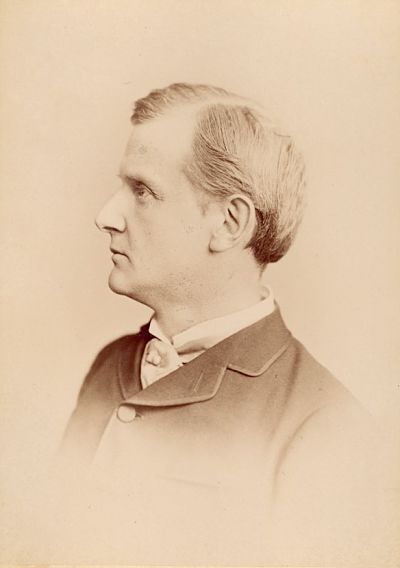 The diary, owned by the Filson Historical Society in Louisville, is quite extensive. The selected entries featured here give a sense of the depth of his experiences.  If you want to read the whole diary, it was published in The Filson Club History Quarterly in April and July 1950.

May 1st, 1861, Wednesday[i]—Left St. Louis in a.m. [American]Fur Company steamer “Spread Eagle” at 12-3/4 o’clock. Passage to Fort Benton paid at Pierre Chouteau Jr. & Co.’s $100. Carry with me a Hawken rifle, 7 cannisters powder and other ammunition, a few articles of clothing and a small assortment of beads, vermillion etc. for presents. . . Find the boat very roomy and pleasant, additional exertion being made by the owners to render the boat agreeable to several ladies en route for the mountains. Entered the Mo. River at 4 P.M.

May 2nd, Thursday—Passengers by this time, with their baggage, guns &c, all settled for the long trip before us. Was much amused with the excited manner of an English gentleman [who] carries baggage enough for a regiment and fire arms sufficient to arm a platoon of riflemen.

Begin already to talk mountain talk with the trappers and voyageurs on board. Am a little surprised to find that weak eyes are a very frequent source of trouble with the Mtneers, caused they tell me by the glare of snow and the cold winds which they face. Two on board have had operations for cataracts performed while in St. Louis.

May 6th, Monday—The day mild and without incident. Have been busily comparing Lewis & Clarke’s work with late Govt. maps. Am surprised at their accuracy.

May 12th, Sunday—We reached the pretty town of Omaha, capital of Nebraska Territory. Here we landed our freight destined for the Pawnee Indians, whose Reservation is to the Southward.  This tribe which even in the days of Lewis & Clark had begun to decline before the growing power of the Sioux, has been so hemmed in by civilization that they must perforce adopt in some degree the habits of the white man. The government annuities are to them indispensable for they possess but little. . .that they can turn to practical account.

May 19th, Sunday—During the whole day we made but 5 miles or rather less. The worst bar that we have yet encountered opposed us. To get over, we had to lighten, as it is termed; that is we left half of our cargo below, crossed the Bar, discharged the remainder above, and returned empty to take on board that left below. This method, the only one, is as might be supposed very tedious and wearying to the men, as well as injurious to the Cargo.

June 3rd, Monday—Have been putting in practice and augmenting my stock of signs for intercourse with Indians. Can get along surprisingly well already. The sign language is common to all tribes on the Eastern side of the Rocky Mts. The simplicity and appropriateness of the gestures that one feels at first surprised that they need any explanation. The Indians use them even when talking.

June 23, Sunday—We were smoking our after-supper pipes when the cry of Fire was raised below. The rush and excitement was terrifying but the boat being near shore a hawser was gotten out ahead and after some delay the human freight safely landed. I managed to save my gun, pistol, overcoat, valise and blankets besides various property of others. 200 kegs of powder were aboard.  The knowledge of this deterred us from making exertions that might have saved a great part of cargo. The boat floated down after the hawser burned and the powder exploded with a tremendous noise. Boat and cargo total loss.

[Following the sinking of the “Spread Eagle” Brown continued his journey on horseback.]

June 24, Monday—I and the Maj. had succeeded in obtaining a couple of horses from one Jim Chambers whom I found to be originally from Frankfort, KY.

July 4th, Thursday—Late in the afternoon passed a bold Soda Spring, some of the water we took to make bread in honor of the day and found it answered excellently. Had a supper extraordinary in honor the day with all the rarities of the game market. Musquitoes (sic) very bad—were forced to make “smudges” of Sage all round camp.

July 12th, Friday—. . . at 12 ½ o’clock I had my first sight of the Rocky Mts. In the W. and N.W. towering in the distance and capped with snow. . . .At 2 o’clk decended (sic) into the vally (sic) of sun river, the most beautiful stream that I have ever seen, large, bold, cold as ice, fed from the rocky Mt. snows and swarming with Trout.

July 26th, Friday: Dr. Lansdale from the Columbia Riv. settlements came in with news from the States, which had great interest for us all. Felt very much as I were not doing exactly right in absenting myself from the States at this time. [Note: Although the Civil War began in April 1861 Brown did not join the Union army until 1862 after another trip to the west.]

August 5th, Monday—A very little rain about day break. Rode up to the mill and had my horse shod. Lost much time waiting on the smith. Had quite a treat looking over files of the Scientific American from Jan. 60 to May ’61, belonging to the boss-carpenter.

August 8th, Thursday—Lounged about the Fort [Owens] which is well built of Adobe, commodious and very neatly kept. A fine well in the center, good saw and grist mills and plenty of books.

Sept. 25th, Wednesday—Loitered up and down the single street of the town [Walla Walla]. Find a marked difference in the Climate of this place and that of the Bitter root Valley. I left snow there and find here Watermelons and fruit in abundance. Rigged myself out in new clothes, discarding my buckskins. . . .Exciting news from the States and particularly from Ky. This makes me more anxious than ever to hurry home.

Oct. 21-22, Monday and Tuesday: Drove into the City of Salt Lake which we entered at 6 a.m. Saw all the sights. A fine theater now being built by the Church. In evening called on Brigham [Young] but he excused himself after a few minutes of conversation on plea of business.

Nov. 4th, Monday: Left early for St. Louis. Met Gen. Todd and at 2 p.m. got to St. Louis, stopping not a stone’s throw from the point from whence I took my departure on the 1st May.

[i] John Mason Brown, Diary, 1861, Special Collections Mss A, B878a, Filson Historical Society. All diary entries presented here are verbatim, and were not edited by the author.