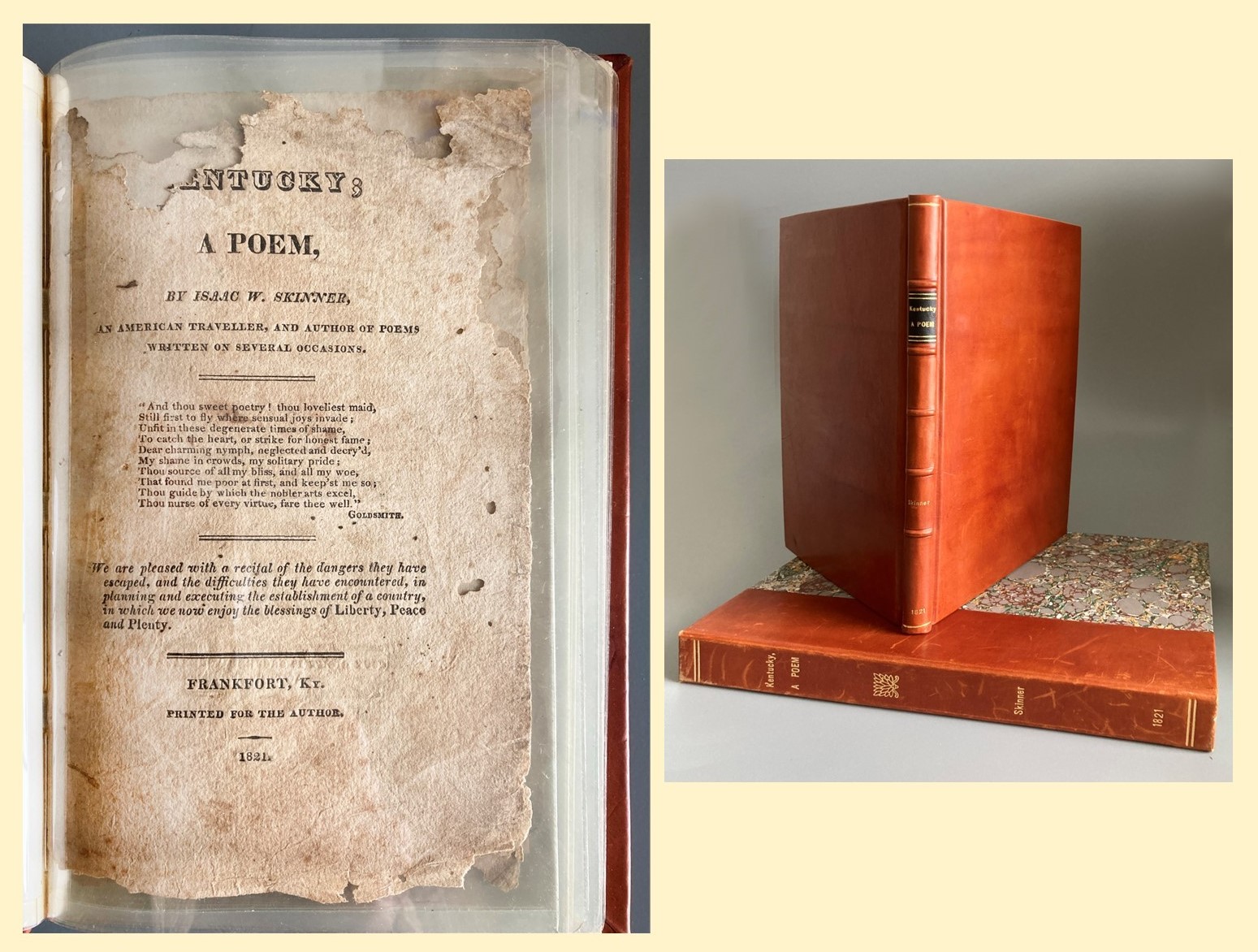 This thirty-six-page book contains a poem that briefly describes Kentucky’s landscapes and then praises early Kentuckians, including Daniel Boone, Isaac Shelby and William Whitley.  Eleven men are lauded, and footnotes explain their significance.  Many served in either the French and Indian War or the War of 1812.

The author, Isaac W. Skinner, appeared on the 1820 Federal Census in Georgetown, Scott County. His age was between 26 and 44, he lived alone, and was engaged in manufacturing.[2]  His book was printed in Frankfort in 1821. The Frankfort printer is unknown, but it might well have been Amos Kendall.  In October of 1816 Kendall moved from editing the Scott County Georgetown Patriot, owned by Col. James Johnson, to Frankfort where he edited the Argus of Western America, and opened a printing office where “book and job printing” were executed “with neatness, accuracy & dispatch.”[3]

Skinner’s book was dedicated to the same Col. Johnson – an excellent choice, as Johnson was then one of the wealthiest men in the American West.  The book’s introduction indicates that it was published by subscription, although names of the subscribers unfortunately are not listed; had they been, the size of the edition, as well as early owners, would have been clearly recorded.  Quite possibly Senator John Brown or a member of his family was among the original subscribers.  And it is quite possible that other unidentified copies remain in the Frankfort or Georgetown area or beyond.

The moment of Skinner’s publication, 1821, was the very time when American printing offices were advancing in technology from the wooden hand press to the more efficient iron hand press.  The iron Stansbury Acorn press was invented in 1820, a year prior to the printing of Skinner’s book. The more widely popular Washington iron hand press, invented by Samuel Rust, was patented in 1821.  Although Amos Kendall’s Argus carried advertisements from the Cincinnati Type Foundry offering iron presses by 1823 (and perhaps earlier),[4] it is most likely that Kentucky; A Poem was printed in Frankfort on a wooden hand press similar to that used by Johann Gutenberg in Mainz, Germany around 1450.

Our interest here is in the book’s physical qualities, rather than its literary merits.   From that perspective the most striking aspect of the Liberty Hall copy of Kentucky; A Poem is that it was professionally conserved in the 1980s by Conservation Services of Cincinnati.[5]  The pages appear to have been washed and de-acidified to a pH neutral state.  Each individual leaf was wrapped in acid-free transparent mylar and bound together in a traditional full tan calf binding with raised bands on the spine and a gilt-tooled leather label.  The finished book was then housed in an acid free box quarter bound in the same calf leather and completed with decorated marbled papers; the spine of the box was embellished with gilt lettering and a gilt ornament. 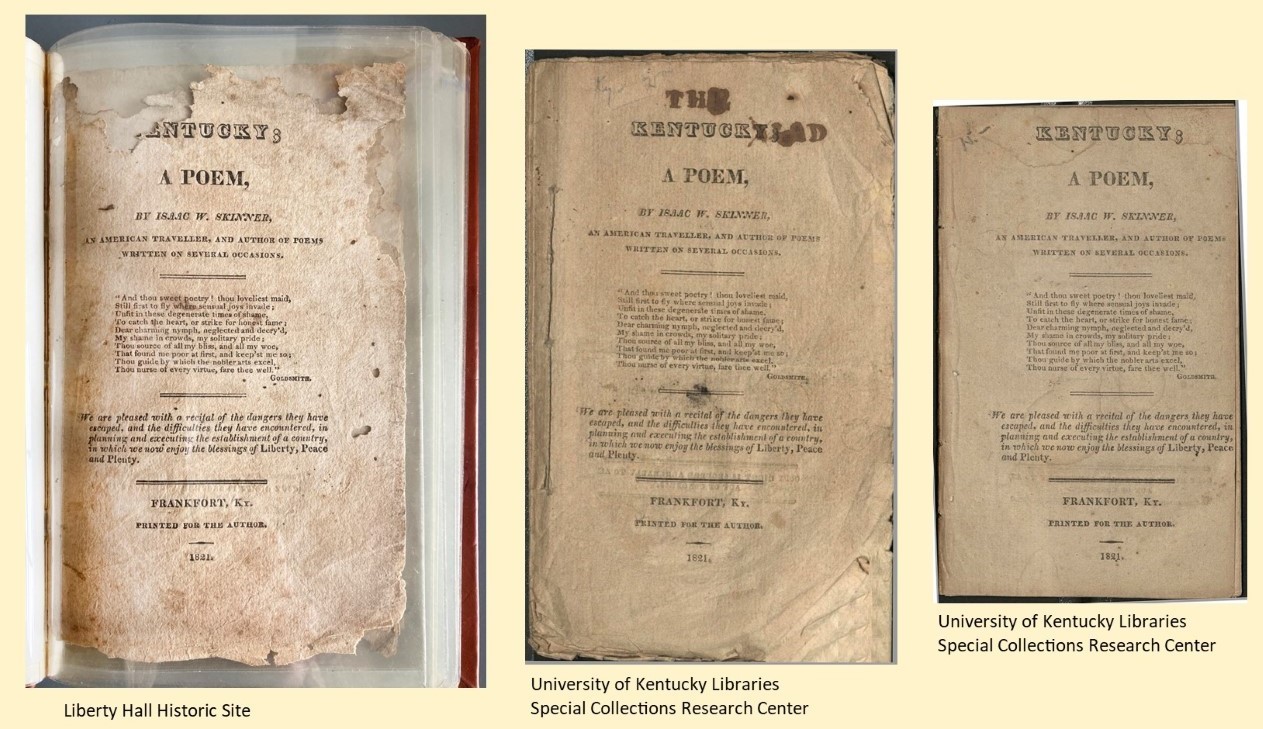 The Liberty Hall copy of Isaac Skinner’s work may be insightfully compared with the two copies in the Special Collections Research Center at the University of Kentucky.[6]  This comparison provides insight into period aspects of the crafts of printing and bookbinding – and possibly papermaking, as well – in early nineteenth-century Kentucky.

Where did the printer get his paper?  There were several paper mills in the early Bluegrass, and one was located in Franklin County, on the Kentucky River at Stedmantown, not far from Frankfort.  The mill was operated by the papermaker Ebenezer Stedman.  Stedman is remembered today as the keeper of an important early diary now in the Special Collections Research Center.  It was published in 1959 as Bluegrass Craftsman:  The Reminiscences of Ebenezer Hiram Stedman, Papermaker, 1808-1885.[7]  It seems quite possible, though not verifiable, that the printer may have used paper from the nearby Stedmantown paper mill.  (Stedman’s mill was based in a powder mill formerly owned by Col. James Johnson.)

The printer of Isaac Skinner’s Kentucky; A Poem was a skilled craftsman very much in touch with the conventions of his time.  The title page, the composition, and the layout of the text are perfectly conventional.  The inking is rich and even throughout.  The typefaces, also, are very much of their time.  The large display font of the title is called Thorne Shaded.  The font for the text is Bulmer, made very popular from its use by the prominent London printer William Bulmer.  These heavy, foundry-cast lead fonts would have arrived in Frankfort by steamboat from The Cincinnati or other type foundry; as true of many historic typefaces, however, both Thorne Shaded and Bulmer can be instantly downloaded today on your computer as free digital fonts from the internet.

The first University of Kentucky copy shows a stab-sewn binding with three perforations. Stab-sewn binding is created using an awl or a similar sharp pointed object, the binder stabs holes along the left edge of a book in a straight line or more complex pattern and then sews thread through the holes to both bind and decorate a book. The stack of folded “gatherings” or folded sheets of the book were joined with a figure-eight stitch.  This is probably the state in which the book was originally sold at the printing office or by a bookseller.  The purchaser of the book could then take it to a bookbinder who could preserve the book in cardboard “boards” covered with leather (usually calfskin for more precious books, sheepskin for lesser ones). 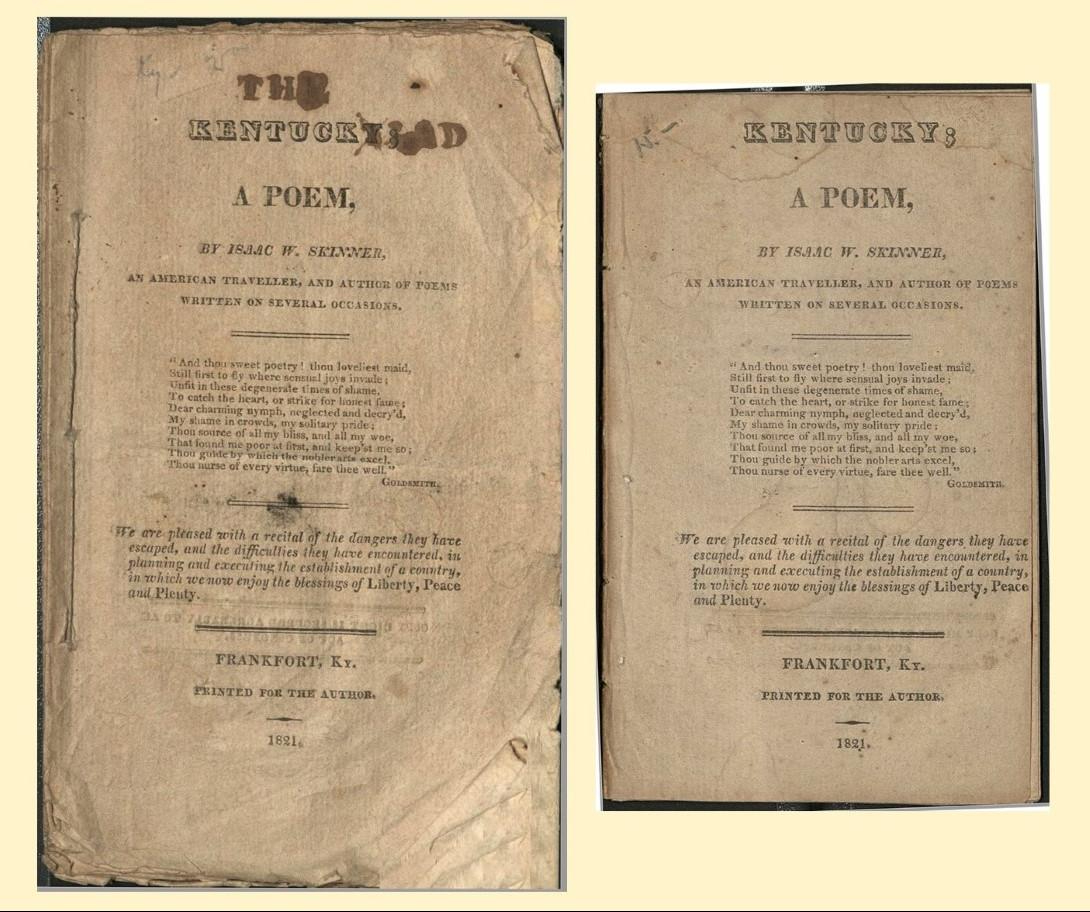 In the case of slender works – sermons, poems, plays, speeches – the buyer might ask the binder to place several titles in one binding.  Such a volume is called a “sammelband.”  The second University of Kentucky example is from a sammelband.  First, you can see the three original perforations in the left margin with the binder’s cord removed.  Second, you can see that the binder has placed the stack of individual works in a vise-like device and trimmed the top, right, and lower margins to the size of the smallest component.  In this case, the right margin of Kentucky; A Poem has been entirely cropped away. 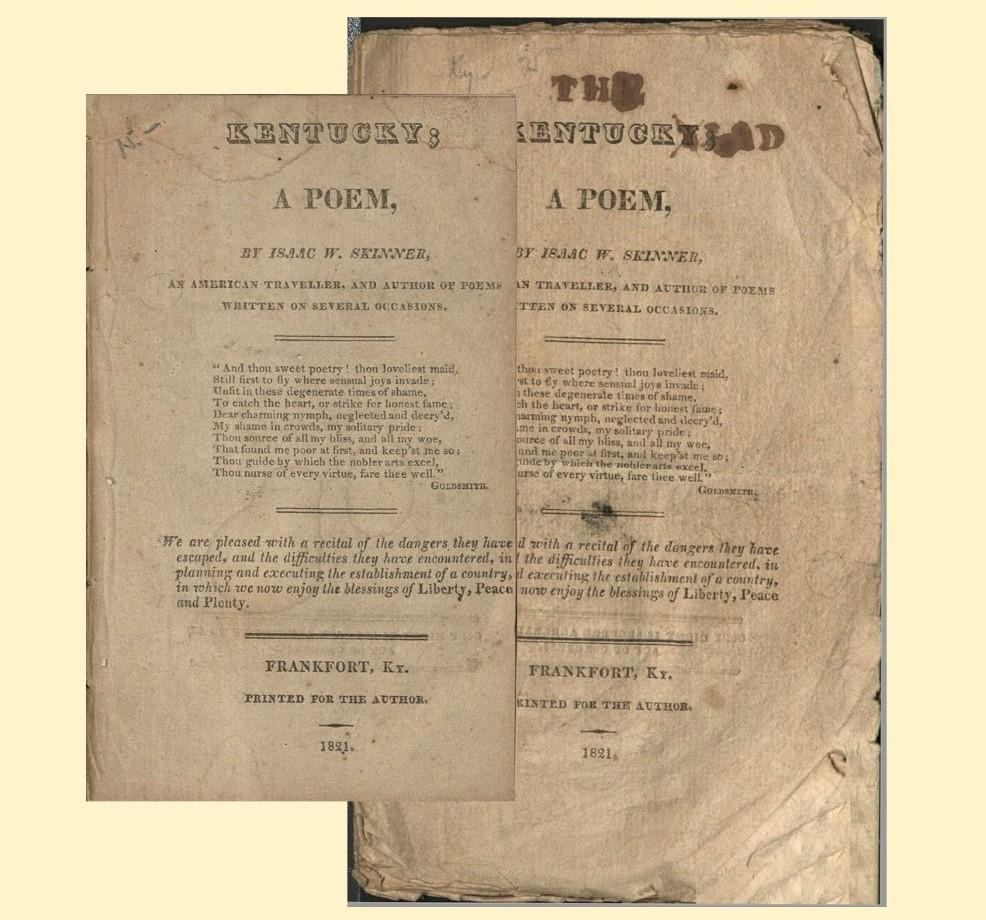 Here are the two U.K. copies again.  On the copy at right you can see two conspicuous features.  First, note the embossed impression of the metal type shown from behind the Oxford (thick-and-thin) rule at the bottom.  This impression occurs because of the power of the press platen and the paper against the hard type, and especially because the printer, traditionally, has dampened and softened the paper before printing the sheet.

On the second copy, which has gone to the bookbinder, you can see that both the type’s embossed impression and the paper itself have been made flat.  This flattening has resulted from the force of the book press used by the binder to ensure that the leather glued to the surrounding boards would adhere evenly. 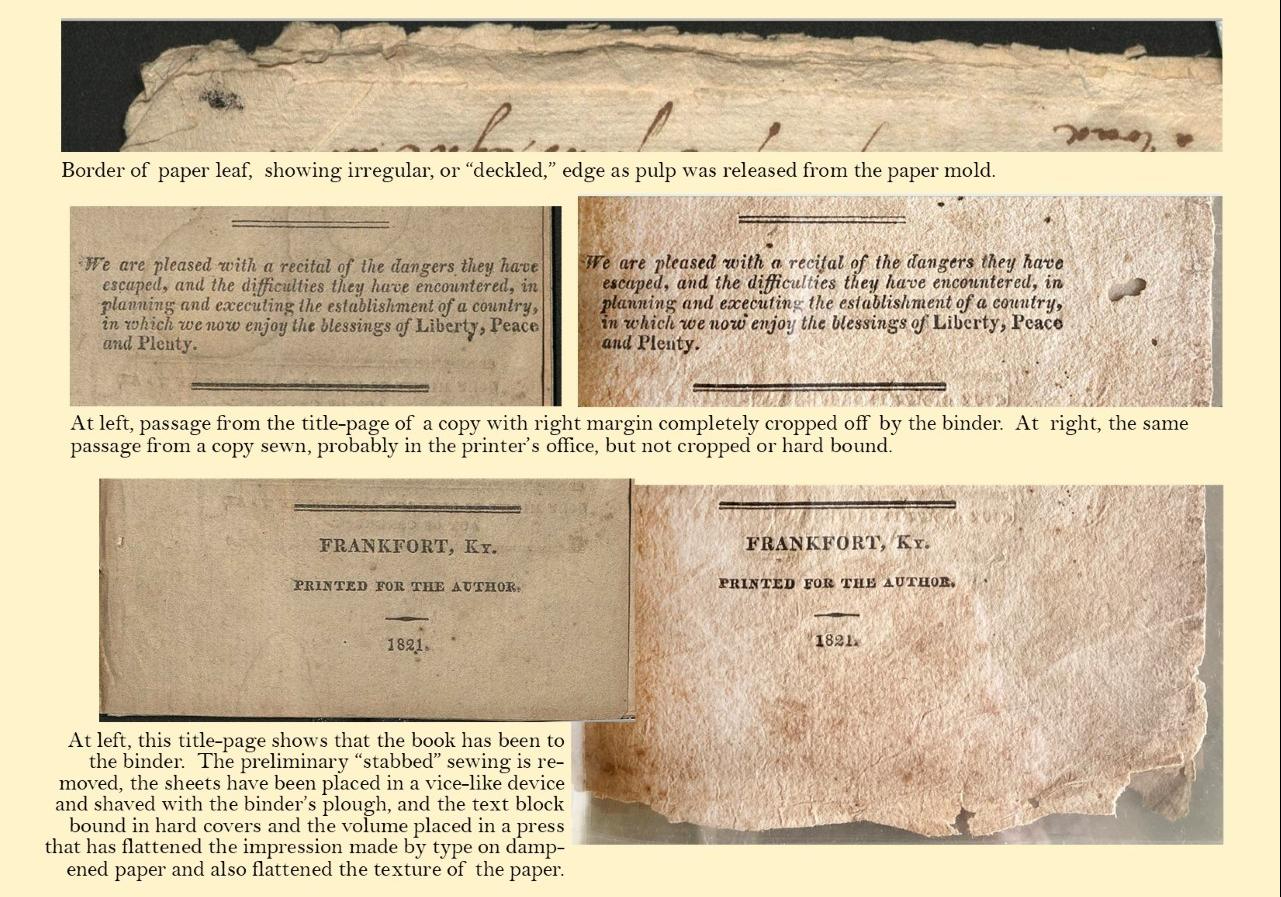 The illustration above summarizes the features of the three copies outlined so far. 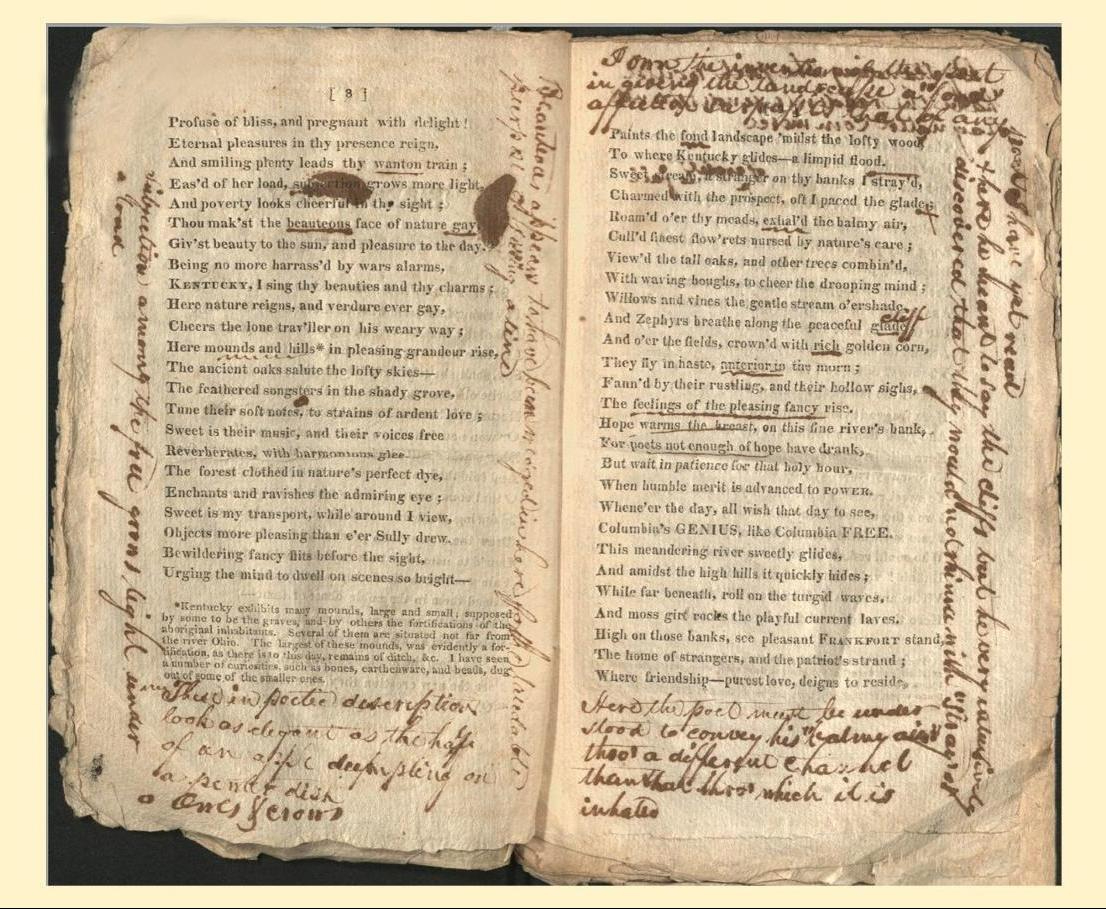 Here you can see a two-page opening from the larger U.K. copy.  This displays the deckled edges of the paper left, right, and below.  A deckled edge is a feathery, unfinished paper edge. The top is even because the paper was folded here after printing and the fold has been cut open with a blunt knife.  From this copy you can determine the full size of the original paper leaves and probably determine the size of the papermaker’s mold.

If a binder binds the book without cropping the margins, as shown here, he creates an “untrimmed” or “tall copy.”  Tall copies from the hand press period are most prized by collectors.  Also, should the folds remain unopened at the top, the book is said to be “uncut” or “unopened.”  Uncut copies, too, are more highly valued by the collector, as closest to the original form of the work as it left the printing office.

Liberty Hall’s copy of Isaac Skinner’s Kentucky; A Poem is a remarkable and rare survivor.  It speaks to the Brown family’s interest in literature and encouragement of cultural achievement in the early days of the Commonwealth.  And in company with the copies at the University of Kentucky, it reveals much about the early crafts of printing, papermaking, and bookbinding in the Bluegrass.

[1] This essay is based in part on research by Martha Birchfield, Liberty Hall Historic Site Collections Committee.

[2] He perhaps moved to Frankfort as he appears in a Franklin County court case, John Dunn vs. Isaac Skinner, in 1831.  “Motions,” The Frankfort Argus, Frankfort, Kentucky, Wednesday, 9 November 1831, p. 2.

[3] Argus of Western America, Frankfort, Kentucky, Wednesday, 3 December 1823, p. 4.  “Kendall and Russells” were Printers to the State.  Other printers active in Frankfort at this time were Moses O. Bledsoe, J. H. and W. B. Holeman, and O’B. Petit (The Baptist Chronicle), any of whom could have produced Skinner’s Kentucky.  Amos Kendall (1789-1869) lived in Frankfort from 1816-1828.  On arrival in Kentucky he first spent a year as tutor to the children of Henry Clay, America’s leading Whig.  After moving from Lexington to Frankfort he became allied with the Democratic party and Clay’s rival, Andrew Jackson.  Upon Jackson’s election as president he moved to Washington where he was a close advisor to Jackson and served as Post Master General from 1835-1840.  As an agent for telegraph inventor Samuel F. B. Morse Kendall became wealthy and a philanthropist.

[5] Telephone interview with Charles Price (formerly with Conservation Services), 9 November 2020, who recalled the leather of the restoration binding and also the marbled paper of the accompanying box.

[6] Images from the two University of Kentucky copies of Kentucky; A Poem and permission to illustrate have been generously provided by Colleen Barrett, Rare Books Librarian of the University’s Special Collections Research Center.