A Charming Garden: Liberty Hall Grounds in the Early Years

When spring arrives at Liberty Hall Historic Site, the daffodils and bluebells make it easy to forget that the grounds once served a different purpose.  Margaretta Brown may have brought New York roses to her Kentucky home, but her letters reflect a more practical use of the land.

When the Browns arrived in 1801, John was serving in Congress and Margaretta had to oversee indoor and outdoor projects.  In December she wrote to John about a delivery of hay and fencing timber.  “I have had a pair of stout Shoes made . . . which are water, proof,” she reported.  “They will be very useful to me, in walking over our grounds – I have also a large Ugly [hat] to keep off the Sun.”[i] 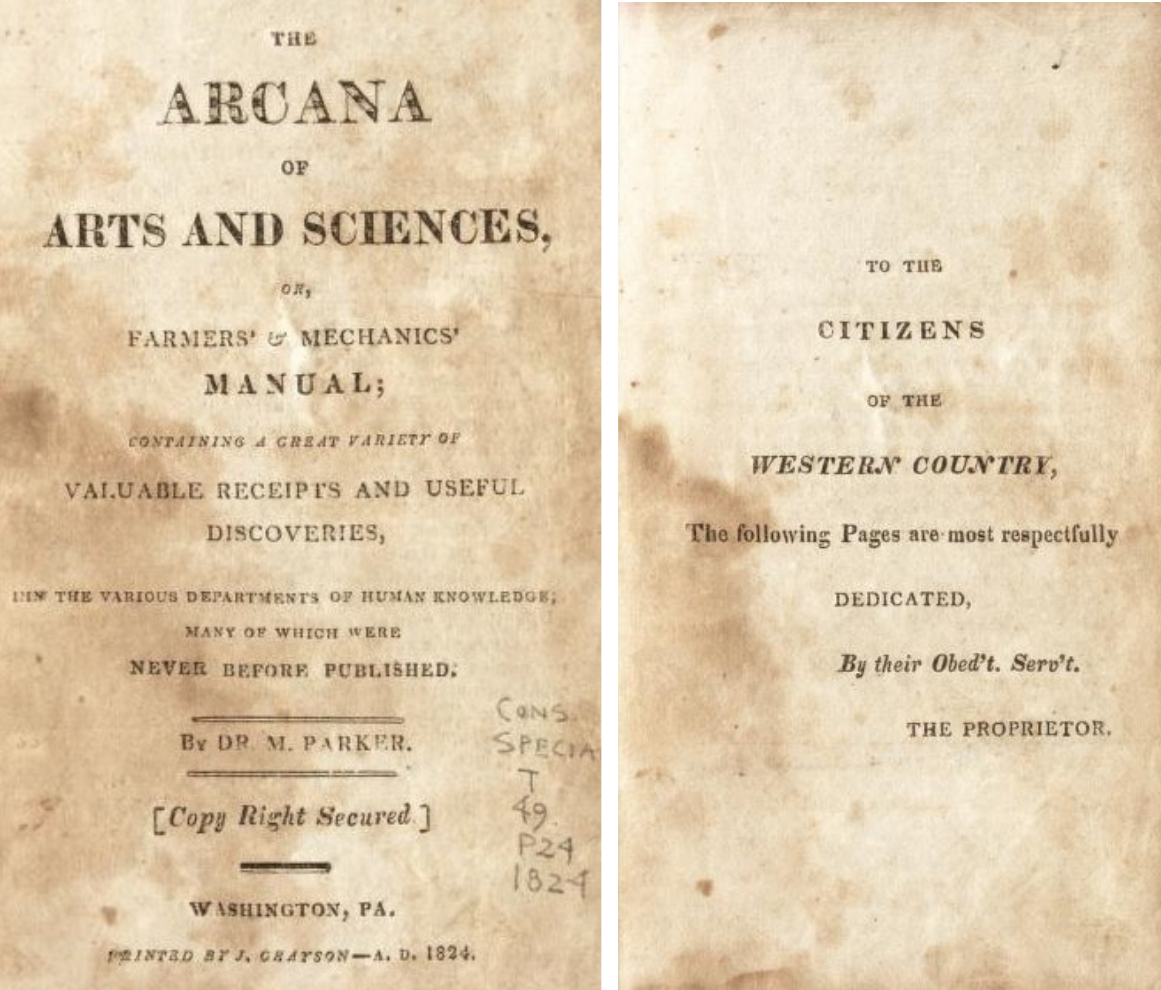 The Arcana of Arts and Sciences, or, Farmers' & Mechanics' Manual, 1824Margaretta, who grew up in New York, was new to gardening.  But historian Stuart Seely Sprague writes that young John Brown enjoyed farming.[ii]  In his letters John commented on weather and crops, but his involvement in politics, church, and civic affairs suggest that his role on the grounds was primarily supervisory.  He owned a 1799 garden manual with directions for growing vegetables and fruit and an 1824 advice book “dedicated to the citizens of the western country” with a section on agriculture.[iii]

There is further evidence of vegetables in the commonplace book John kept from 1810 to 1834.  In it he copied advice on planting potatoes, growing celery, and killing insects on cucumbers and peas.  He also included recipes for cooking and preserving vegetables—from frontier staples like dried pumpkin to more sophisticated dishes, like asparagus soup and mushroom catsup.

Writing from New York in 1811, Margaretta asked John if Miles—one of the enslaved men—could plant the “winter vegetables.”[iv]  John’s tax records show that he owned slaves by 1806, and letters suggest that Miles Stepney and his sons worked in the gardens and a cornfield which may have been on the grounds or other land John owned.[v]

The herb garden by the house is a recent addition, but there could have been one in a similar location in the early years.  One of John’s gardening books recommends pla 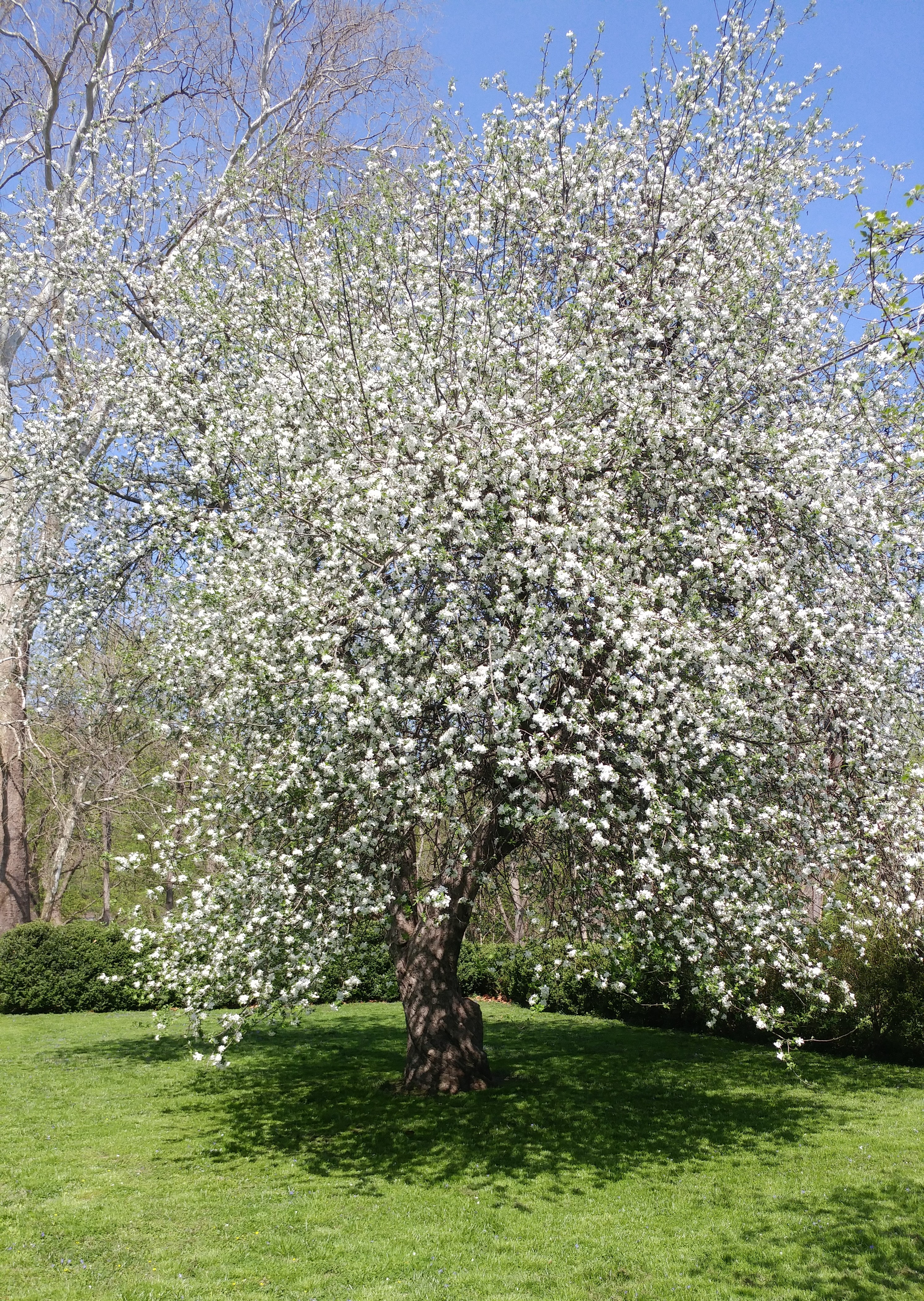 Apple tree in bloom, Liberty Hall Historic Site gardensnting an herb gardennear the kitchen and provides culinary and medicinal herb cultivation advice.[vi]  John’s commonplace book includes recipes that call for herbs and remedies, like a sage-infused mouthwash and a snakebite treatment made with horehound.  In 1801 Margaretta reported to John that when she drank a horehound infusion while nursing Orlando, “it turned the little fellow’s stomach instantly & made him lose all that he had received.”[vii]

Margaretta’s letters also document fruit crops.  In 1804 she described the grounds as “a charming garden containing four acres . . . planted with grapes, and every kind of fruit, either natural to the soil or which can be adopted with success.”[viii]  The grapes may have come from John James Dufour, who established a winery in present-day Jessamine County.  As an investor, John was entitled to cuttings, and Margaretta wrote to him in 1802 about a visit from “Mr. Dafour.”[ix]

Later letters mention apples and pears.[x]  The commonplace book includes advice on tending to fruit trees, storing apples, and making wine from apples, currants, cherries, and gooseberries.  The library contains several books about maintaining orchards—one which could have belonged to John and one inscribed by Mason Brown.[xi]  John left land he purchased in Owen County to his sons, and Mason established an orchard there. 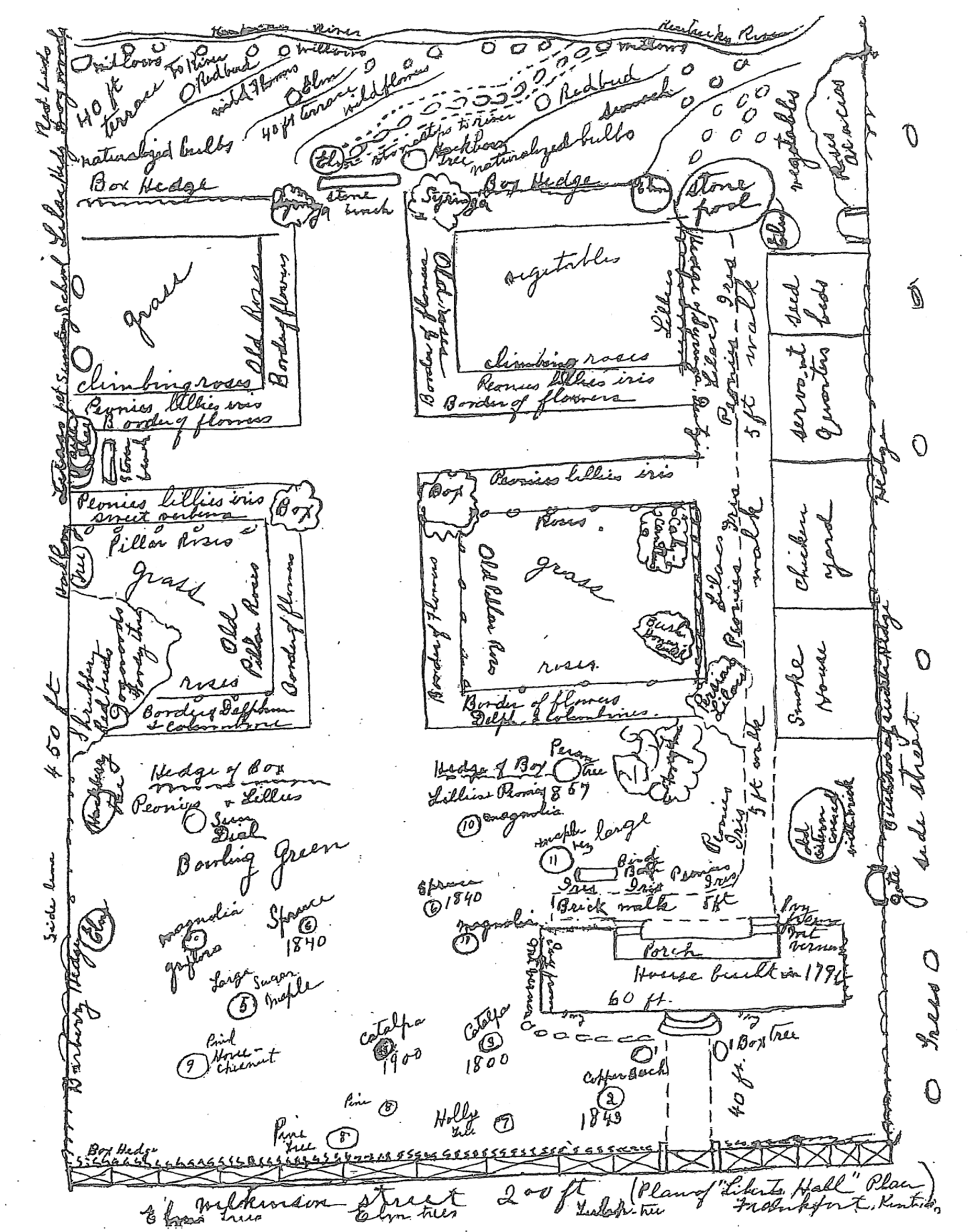 Mary Mason Scott garden diagram, 1939Family stories credit Mason’s wife Mary Yoder with planting flowers on the grounds, but later generations grew vegetables too.  Mary Yoder Brown Scott, the third owner of Liberty Hall, kept a commonplace book devoted to gardening.  Although most of her entries are about flowers, there are over thirty references to vegetables and fruits—from asparagus to turnips. Mary also owned a book about growing mushrooms.[xii]

In the early 1930s Mary “Mame” Mason Scott, the last Brown family member to live in Liberty Hall, drew a diagram of the garden “as it was during the past two generations.”[xiii]  In addition to flowers and trees, it shows two vegetable gardens.  Mame’s 1926 diary documents many days in the flower gardens but also mentions two apple trees, one planted in 1926.

In the years since Mame’s death in 1934, flower beds have replaced the vegetable gardens on her diagram.  A few fruit trees are the only reminders that the residents of the site once depended on the grounds for food as well as beauty.

[iii] Charles Marshall, Introduction to the Knowledge and Practice of Gardening, Vol. 1 (1799) and M. Parker, The Arcana of Arts and Sciences, or, Farmers’ & Mechanics’ Manual (1824), Liberty Hall Historic Site Collections.