This Band of Devoted Women: Preservation Stories of Mount Vernon and Liberty Hall

Ann Pamela Cunningham of South Carolina established the Mount Vernon Ladies Association (MVLA) in 1853. Her work and legacy of rescuing and restoring Mount Vernon, the former home of George Washington in Virginia, is recognized as the beginning of the historic preservation movement in the United States and the inspiration for many women to become involved in this work in their own communities.

Reportedly inspired by a letter her mother wrote to her after seeing the derelict condition of Mount Vernon from a steamer on the Potomac, she wrote, “I was painfully distressed at the ruin and desolation of the home of Washington and the thought passed through my mind: Why was it that the women of his country did not try to keep it in repair, if the men could not do it? It does seem such a blot on our country.”[i] 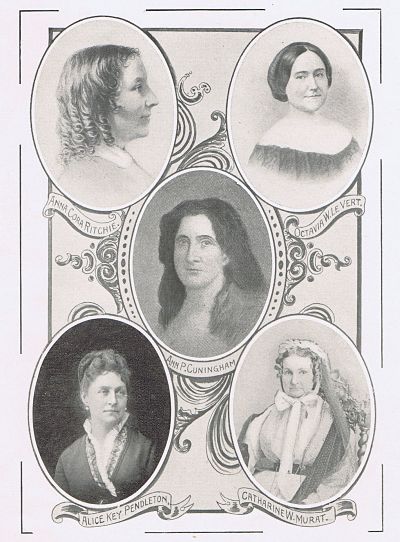 Mount Vernon Vice-Regents with Ann Cunningham, The Report of the Virginia Board of Visitors to Mount Vernon, 1901 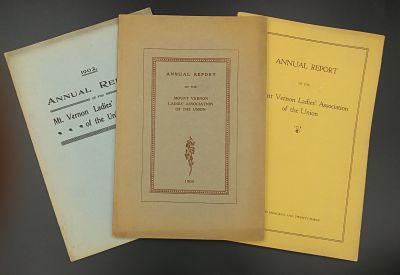 Mount Vernon Ladies Association Annual ReportsIncluded in the library at Liberty Hall in Frankfort, Kentucky are thirty-two Annual Reports of the Mount Vernon Ladies Association (1897 to 1950, not inclusive of every year) and several other publications from this organization.  Reviewing these publications reveal that two women in residence at Liberty Hall were members of the Mount Vernon Ladies Association.  Margaretta Mason Brown Barret served as a Vice-Regent representing Kentucky on the Association from 1902 until her death in 1920.  Mary Mason Scott followed in her aunt’s footsteps and also became the Kentucky Vice-Regent beginning in 1923.  Mrs. Mason (Rosa) Barret, daughter-in-law of Margaretta Mason Brown Barret, served as the Kentucky Vice-Regent for the Association beginning in 1938 as listed in the 1940 and 1950 Annual Reports. Two other Kentucky women are noted as serving as Kentucky regents: Mrs. Rosa Vertner Johnson Jeffries (1858-1885) and Mrs. Eliza Woodward (1885-1889; 1891-1897). 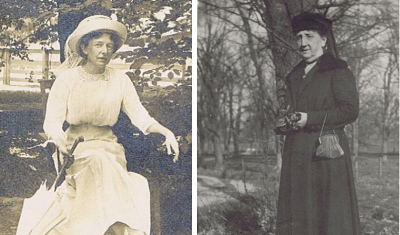 Mary Mason Scott was the last family member to live in Liberty Hall.  She was born in 1867, the great granddaughter of Senator John Brown, and died in 1934.  Her life as a single woman reflected the interests and opportunities opening for many women at the time.  She was well traveled and well educated.  From (1894 to 1916) she shared the house with her mother and two aunts.  These three widowed sisters (Mary Yoder Brown Scott, Margaretta Mason Brown Barrett, and Eliza Eloise Brown Baily) sharing their childhood home must have provided quite a spirited environment for Mary Mason Scott. After her mother died in 1916, her two aunts continued to share the house with her until they  died in 1920 and 1923.

The Vice-Regent from each state was charged with raising awareness, raising funds and even donations of historic items to restore and furnish Mount Vernon. Recorded gifts presented to Mount Vernon from the two Brown women included a cane made from the wheel spoke of Washington’s carriage, a brass lock from Liberty Hall for the door at Mount Vernon that leads from the library to the east portico, as well as multiple monetary donations collected from various organizations and individuals in Kentucky. [ii] 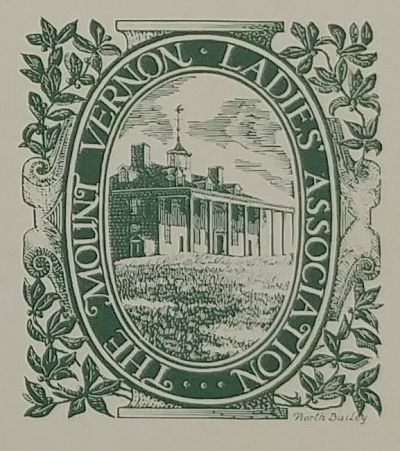 The Mount Vernon Ladies Association of the Union Annual Report 1950, Liberty Hall Historic Site CollectionsThe gift from Kentucky to Mount Vernon that received the most attention in these annual reports was two mules. In the 1903 Annual Report Mrs. Barret reported a total of $200 raised to buy two Kentucky mules to be transported to Mount Vernon via the Chesapeake and Ohio Railroad. The 1904 Annual Report included this note: “I must not forget the gift of two mules, sent us by Mrs. Barret.  They are a beautiful pair and caused us much delight, for we lost a pair of horses during the severe winter.”[iii] The 1913 Annual Report included this note: “The Kentucky Mules continue in their useful career as general service animals.”[iv] The 1914 Annual Report however included this note from the Farm Superintendent: “The pair of mules, given us in 1903 by the Vice-Regent for Kentucky – showed depletion of strength after their ten years’ hard labor on the steep grades of Mt. Vernon and I was advised at last Council to dispose of them.  I found a purchaser and good home for them in the flat country over on the Maryland shore, selling them for $250.”[v]

Mary Mason Scott never married and had no children to inherit Liberty Hall.  During the last decades of her life she actively worked to develop a preservation plan for the house.  She began the 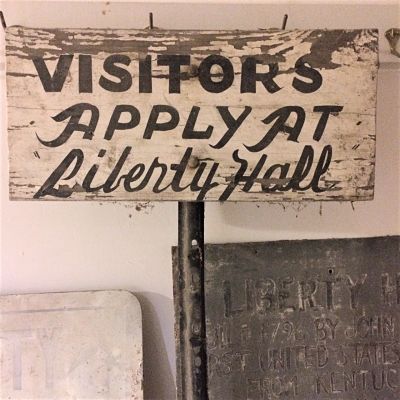 Liberty Hall sign, ca. 1920, Liberty Hall Historic Site Collections process of restoring Liberty Hall by removing some Victorian changes and putting back the chair rails. She may have even offered tours of the home while she was still living. In 1922 the Frankfort Chamber of Commerce adopted a resolution endorsing her plan to preserve Liberty Hall noting it is “already one of the show places of Kentucky.”[vi]

Without a doubt, Mary Mason Scott’s work with women in the Mt. Vernon Ladies Association – gave her the inspiration and determination to preserve not only the property at Liberty Hall, but also the contents, which include furnishings, portraits, textiles, books, and archival documents relating the family’s story over several generations.  Her experience with MVLA also undoubtedly provided her a network of expertise that proved to be helpful for decades to come. 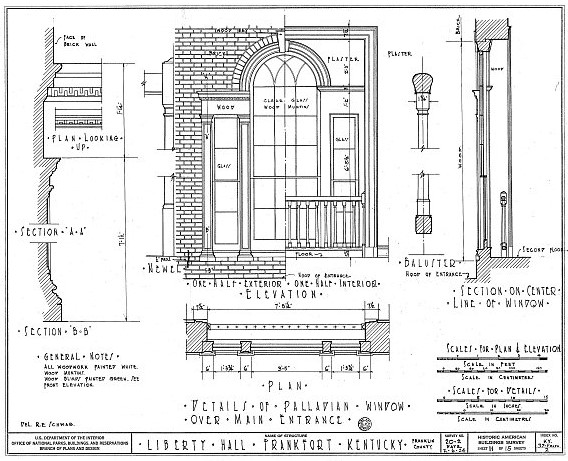 Palladian Window, HABS drawing, Library of CongressIn 1934 Liberty Hall – along with the Old Capitol in Frankfort – was one of the first historic sites documented through the Historic American Buildings Survey (HABS).  This documentation was completed just one year after this program was initiated. The HABS program was initiated by Charles E. Peterson, an architect working for the National Park Service.  In 1978 Peterson served as a consultant for the restoration of Liberty Hall – which illustrated the connections made by Mary Mason Scott on a national level.

One MVLA pamphlet from 1911 includes this description of these ladies: “In view of the many activities and innovations, in vogue, nowadays, in Woman’s sphere, notably the club, the suffragette, the hobble skirt and the enormous lid, which overshadows all other articles of apparel, a glimpse at the object, aims and history of this association of patriotic and noble women of our land should be especially interesting, instructive and wholesome.” It goes on to note the praise that is due “over and above all” for the “service, despite almost insurmountable obstacles, rendered by this band of devoted women. . .”[vii]

Following the death of Mary Mason Scott, the property incorporated as a museum and The National Society of The Colonial Dames of America in the Commonwealth of Kentucky have undertaken the ongoing research, preservation, fundraising, restoration, and maintenance of this landmark since the late 1930s. 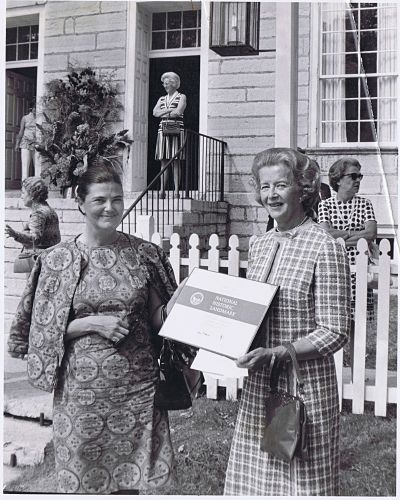 Over the decades as a museum, the Colonial Dames have sought out expertise in Kentucky and nationally to advise and work on the restoration and maintenance efforts of the site.  The Garden Club of Kentucky hired Arthur A. Shurcliff, Landscape Architect at Colonial Williamsburg, in the 1940s to consult on the design and restoration of the gardens at Liberty Hall. The gardens have been maintained and are, as Mary Mason Scott desired, “used by the citizens of Frankfort as a park.” [viii] 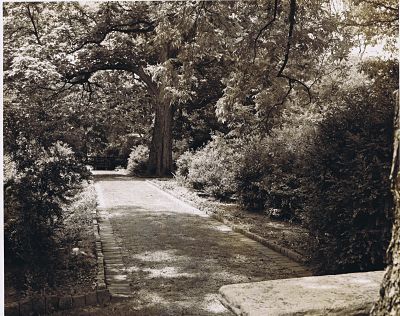 The commitment of this one woman - Mary Mason Scott -  to the preservation of this historic site has inspired the ongoing commitment of an unknown number of women to take up the cause of preservation.  Her initial work and efforts to network with experts also positioned Liberty Hall to benefit from the opportunities presented by the National Historic Preservation Act when it was passed in 1966.  The subsequent national designations added a value to the site and made it possible for early archeological investigations on the site.  The ongoing stewardship of the site has been aided by various state and national experts, and has received funding from both private and public sources, and protection by local and national designations.

Although the house was never derelict or abandoned, there is always preservation work underway.  Recent projects include the restoration of the laundry room and the smokehouse, and the replacement of the wood shingle roof and back porch. The interpretation of the kitchen interior has been augmented with careful research on the enslaved family that also lived at Liberty Hall for more than 50 years.

The story is not complete nor is the preservation effort done.  This site with its rich archival and architectural legacies is still being preserved and interpreted anew with each generation that takes up the challenge of its preservation.

[i] Thane, Elswyth, Mount Vernon is Ours: The Story of its Preservation (1966) New York: Duell, Sloan, and Pearce, accessed on Mount Vernon website

[vi] Peterson, Charles E. and Cynthia A. Cargas with the assistance of Steven M. Albert, The Past and Future of Liberty Hall, Frankfort, Kentucky, a contribution toward a Historic Structures Report (1978), Liberty Hall Historic Site