I Like Dogs: The Browns and their Furry Friends 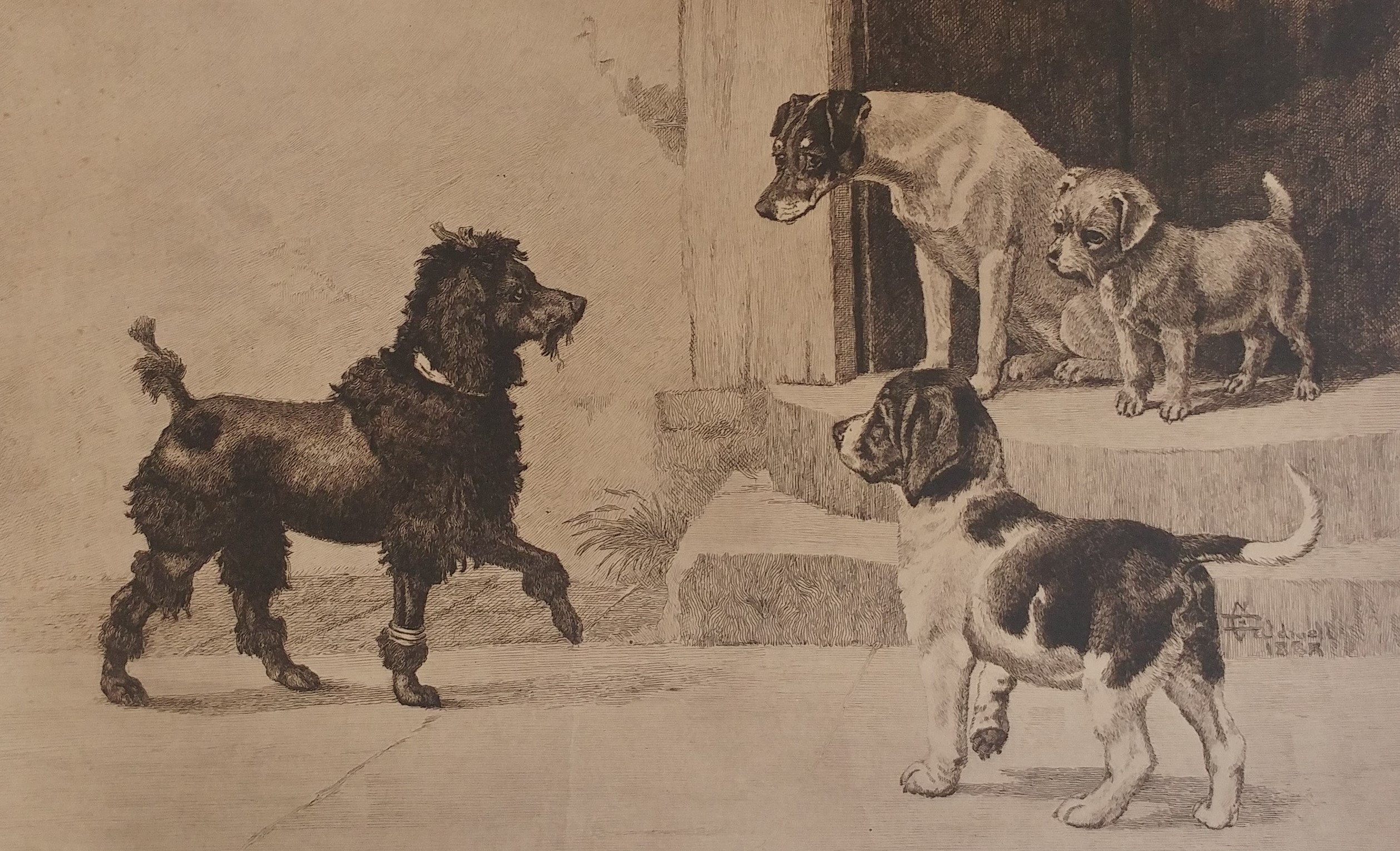 Although figures vary, approximately half of the households that have pets have dogs. That means there are roughly 75 million doggos, doggies, puppy dogs, and good boys and girls in the U.S. [i] No one knows for sure when humans started acquiring dogs as companions, but we do know that dogs, and the occasional cat, have been residents at Liberty Hall and the Orlando Brown House since the early 1800s. 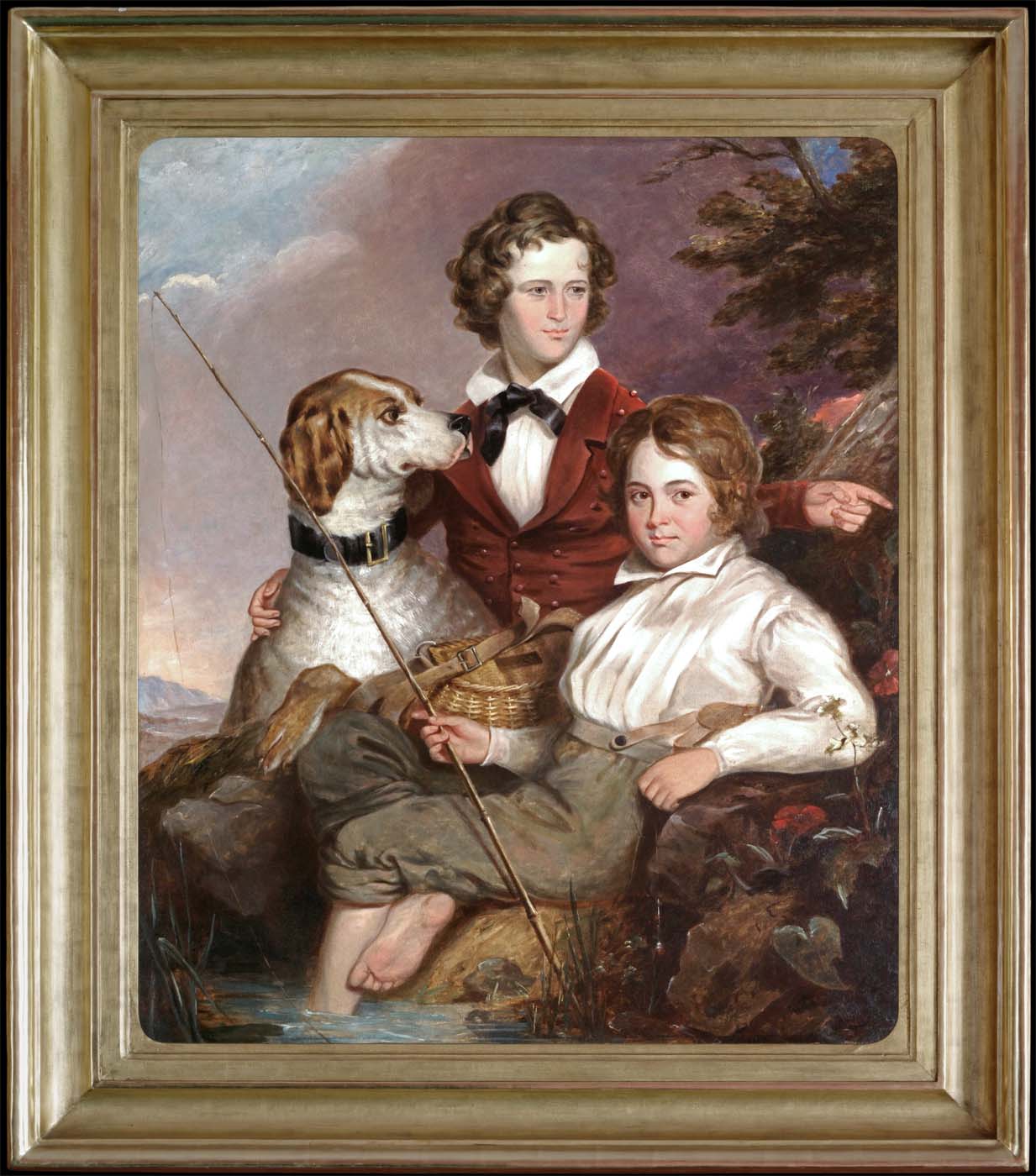 The Children of Orlando Brown by Theodore Sidney Moise and Trevor Thomas Fowler, 1844, Liberty Hall Historic Site CollectionsOne of my favorite paintings in the collection is of Orlando Brown Jr, his brother, Mason, and their dog, Judge. The boys are sitting on the riverbank holding a fishing pole and creel. Mason has his arm around Judge who in turn has his paw on Orlando Jr.’s leg. One can imagine all manner of mischief into which those three might have gotten.

Referred to as “the fattest dog in the family,”[ii] Judge is mentioned a few times in the Brown family correspondence. In 1849, former governor Robert P. Letcher describes his heartbreaking encounter with Judge while Orlando Brown, Sr. and his family were in Washington, D.C.: “I joined Edmund Taylor last evening in a walk and made a halt opposite to the two classical Beech trees. And what do you think? ‘Poor Judge’ came out, and before I noticed him, rubbed himself against my leg, wagging his tail. I liked to have cried. No dog has [given]me the same feeling for many a long day. He really appeared to me to feel joyful and sad at the same moment. He looked up in my face with an expression stronger than words. Most possibly saying, seeing you, my friend, reminds me of my poor old master, who has gone and left me, to mourn in sorrow over his departure. I wonder if I shall ever see him again.”[iii] Although I feel certain Judge did look at him that way, Governor Letcher enjoyed trying to make Orlando feel guilty about not being at home.

The Browns weren’t the only ones to have a pet dog. The Stepneys, the family enslaved by John Brown, owned a dog. In June 1827, Margaretta wrote to Orlando “Tell Henry (as the 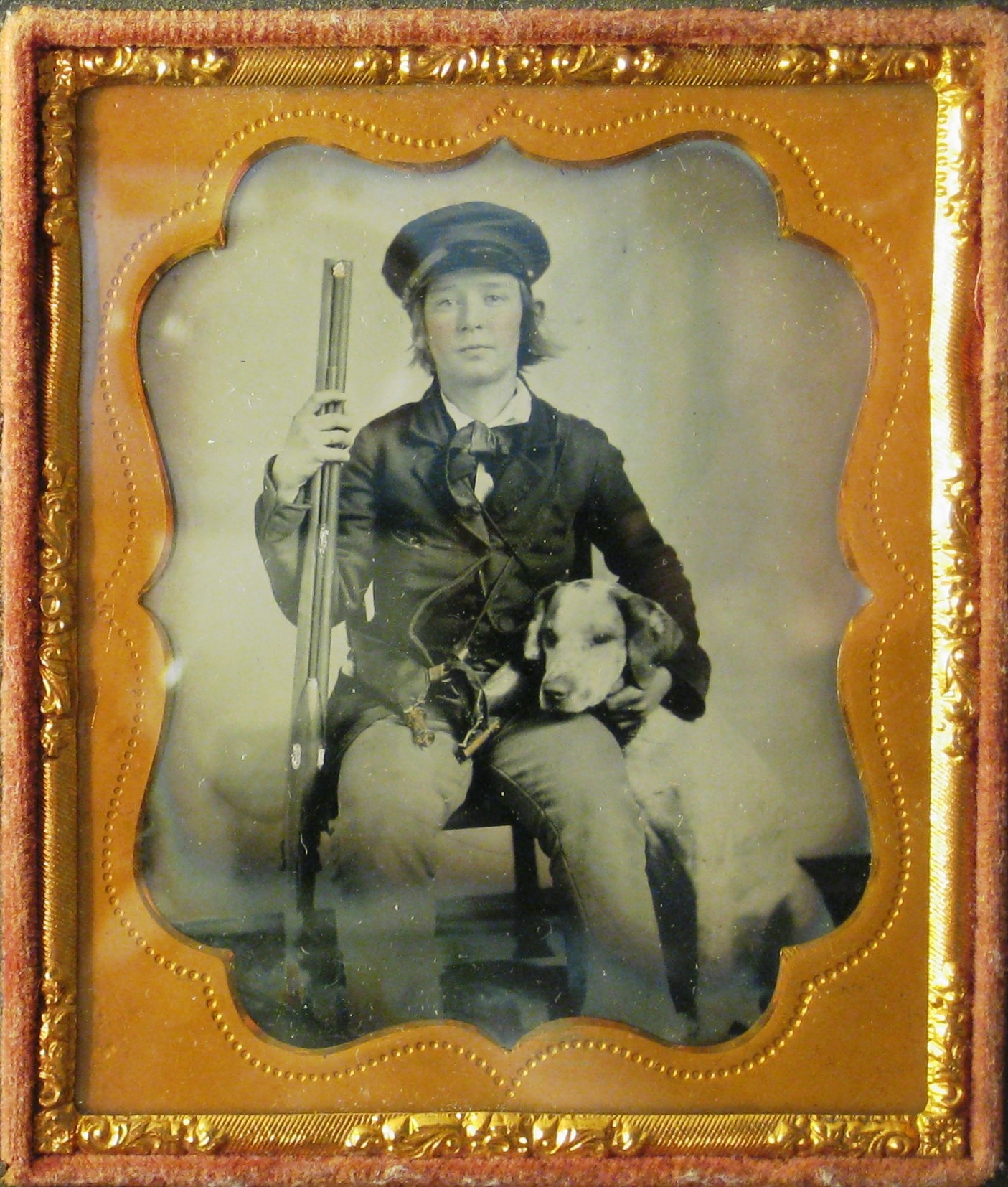 Orlando Brown Jr., ambrotype, 1847-1853, Liberty Hall Historic Site Collections most interesting piece of information I can give him) that Fanny and Major have four young puppies.”[iv]

The archive at LHHS contains other letters and images that document the presence of dogs at Liberty Hall.  There is an 1840s photo of Orlando Jr. posed with his hound and a rifle.  (As an aside, Margaretta wrote to Orlando in 1828, that his brother Mason was “on a shooting excursion—probably to kill turkies (sic)—undoubtedly to kill time.”[v])  And in honor of the Brown boys that attended Princeton, there is an 1895 photo of a dog on the back porch of Liberty Hall that is entitled “The Princeton Tiger.” (Okay, maybe the title refers to the ginger cat, but I like to think they were being ironic.) 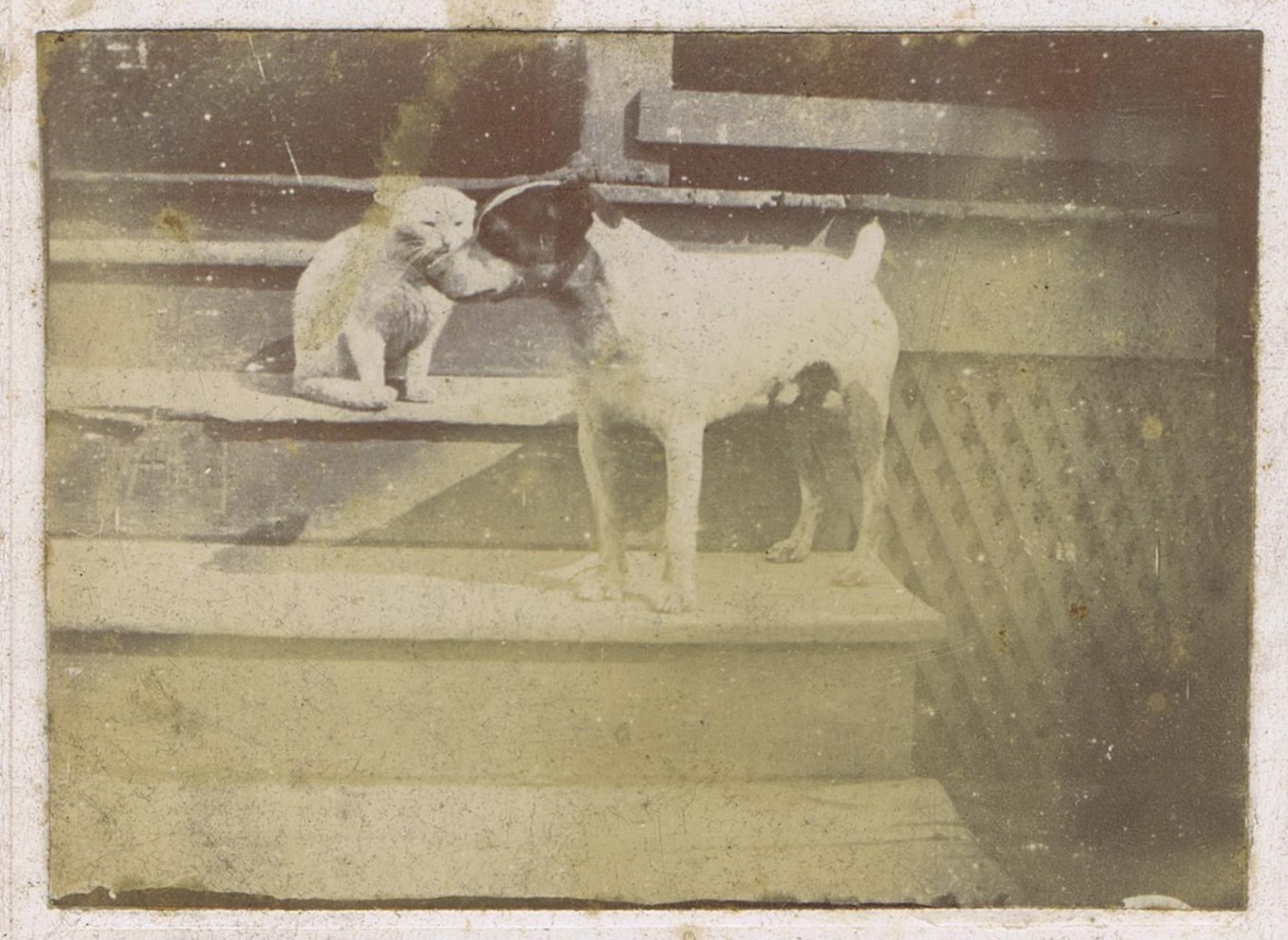 The Princeton Tiger, photograph, ca. 1895, Liberty Hall Historic Site CollectionsThere are several photographs of dogs in the collection that are unmarked, but they prove that there were dogs at Liberty Hall at least until the early 20th century. Margaret Wise Brown, the great-great-granddaughter of John and Margaretta Brown and the author of the poem at the beginning of this blog owned a Kerry blue terrier named Crispin's Crispian. 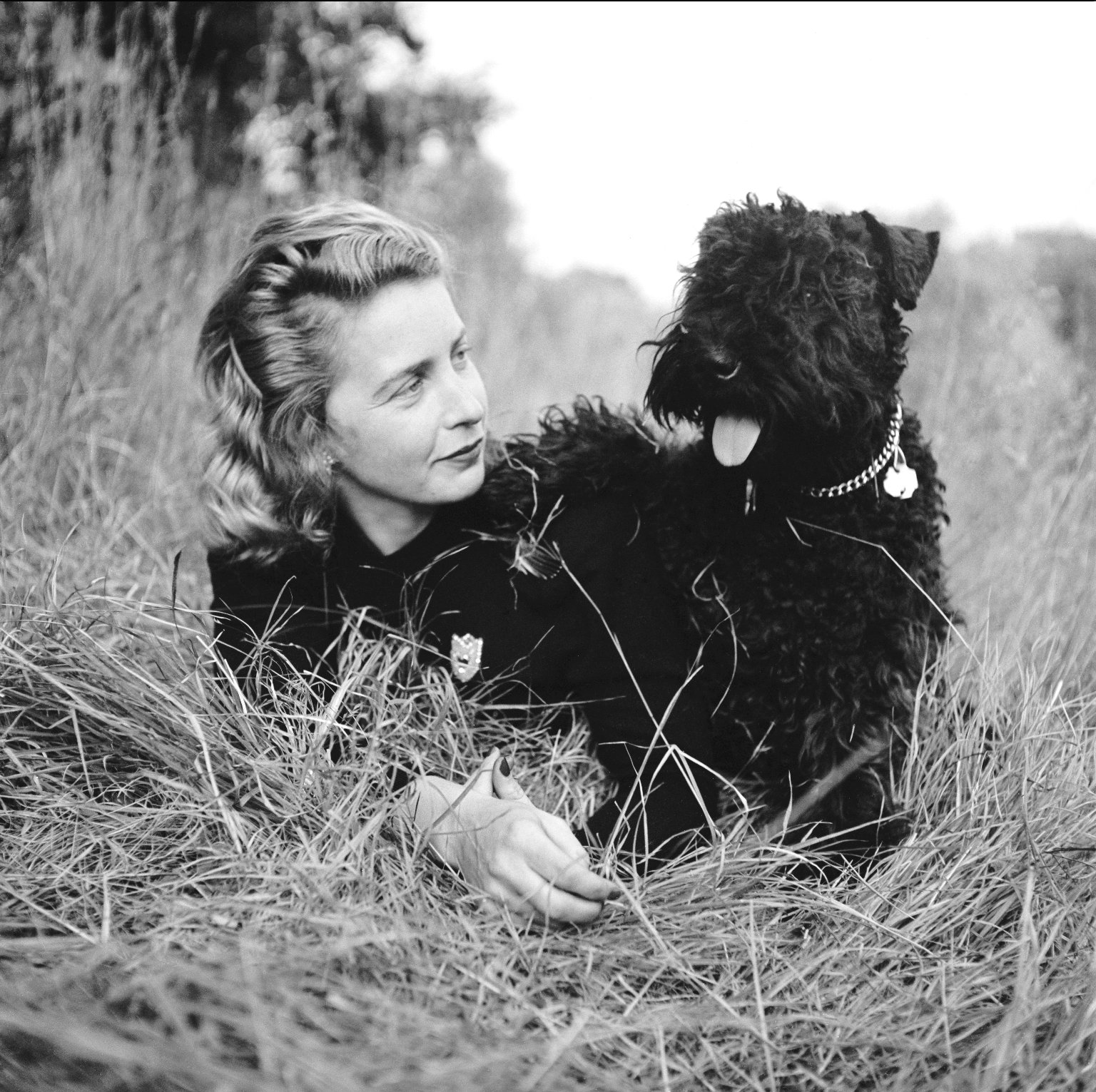 Margaret Wise Brown and her dog, photograph by Consuelo Kanaga, The Brooklyn Museum

I must be fair and mention that there were cats at Liberty Hall as well. In 1827 Margaretta Brown wrote “Duke has been sitting on the table, with his paws on my paper, nearly all the time I have been writing—He is a sad profligate fellow always fighting and coming home wounded—He is so disfigured by scars, that he appears twenty years old.”[vi] Although we don’t know for sure that Duke was a cat, this sounds like typical feline behavior to me.

In 1814, seven-year-old Euphemia wrote a poem about her cats: “I have two little kittens, one black and one grey, They sleep in the closet, and with the wheel play, I feed the old pussey with meat every day, And sometimes I make her a soft bed of hay.”[vii]

A former neighbor of the Browns, attorney George Graham Vest, participated in 1870 in a legal case concerning the shooting of a man’s dog. In his summary of the case, he presented what has been dubbed “Eulogy of the Dog” in which he wrote “The one absolutely unselfish friend that a man can have in this selfish world, the one that never deserts him and the one that never proves ungrateful or treacherous is his dog.”[viii] There is only a partial transcript of his oration that exists and while it is written in a fanciful 19th century tone, it is still a warm tribute to our furry friends (see endnote for link to transcript).

Animals, especially dogs, always make me happy. I hope these stories of the dogs (and cats) of Liberty Hall and the Orlando Brown House brought a smile to your face. Keep an eye out for our annual dog-friendly event, “Barks and Brews.” It will be held sometime in late spring/early summer of next year.