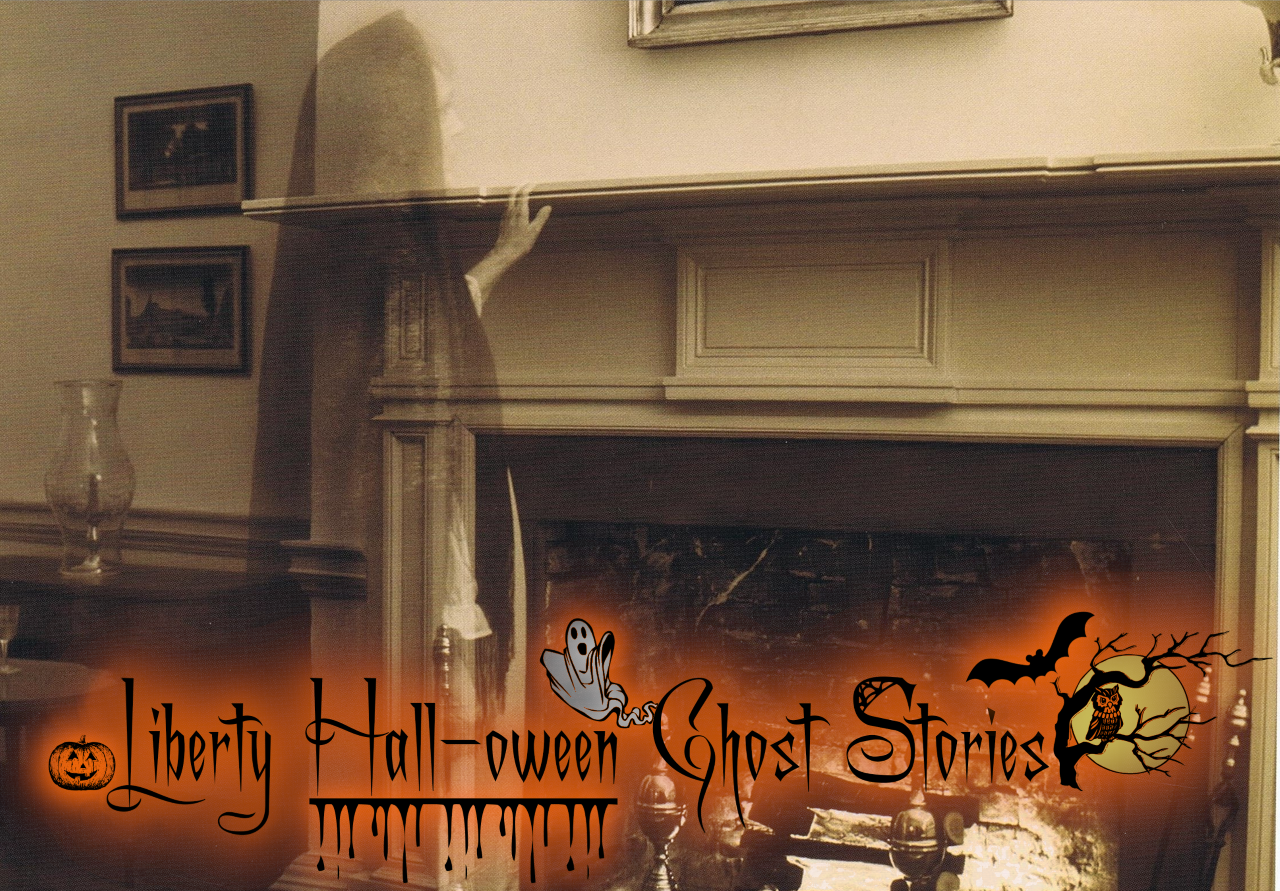 Liberty Hall was built by John Brown, one of Kentucky’s first two senators.  Construction began in 1796 and was completed by 1801, when John moved in with his new wife Margaretta Mason Brown and their firstborn son, named Mason.  Soon after, Margaretta gave birth to their second son, Orlando.  Both Mason and Orlando would survive into adulthood, but sadly, three other children would not be so fortunate.  There were two baby boys, both named Alfred, born and lost in the space of two years, the first deaths to darken the joy of their happy home.

Then in 1807, to the delight of the family, a girl child was born.  She was named Euphemia, and was a light upon the hearts of all who knew her.  But that light would be extinguished too soon, on October 8th, 1814, when she was just seven years old.  Margaretta was nearly undone by the loss.  She sunk into the deepest depths of grief, and her writings at that time were filled with an outpouring of sorrow and despair.

Inconsolable, she grew emaciated and withdrew from life, wandering the gardens of her home, searching for a sign from her angel child.[i]  When her brother visited from New York, he was alarmed by her condition, telling other family members that she appeared to have aged drastically.[ii]  It was feared that her grief would send her to death’s embrace and an early grave.  One can imagine the worry this caused an already grieving family.  Three years would pass, with Margaretta’s emotional state little improved, to the exasperation of some close to her.

Into this house of woe, a beloved visitor would arrive. In 1817, Margaretta Varick, Margaretta Brown’s maternal aunt, arrived from New York.  The aunt had helped to raise Margaretta after the death of her mother at an early age,

Varick death notice, August 9, 1817, Kentucky Gazette and the two were very close.  Mrs. Varick was at the advanced age of 72 and had endured the rigors of the lengthy trip during a particularly hot summer, reaching Liberty Hall in late July.

She had yet to recover from the grueling journey and was with the family for a mere 2 days before she fell violently ill and died on the third night in an upstairs bedroom of the home.  The exact cause of her death is unknown, but a heart attack was suspected.[iii]

Now, a lady such as herself would have utilized what was known as a traveling cloak to protect her few everyday garments from the filthy conditions encountered on the boats and carriages that transported her to Frankfort.  And so she reached the Brown’s household in her gray traveling cloak, and she’s been wearing it ever since.[iv]  She had no means to foresee that this trek would deliver her to her final resting place and begin the long legend of the Gray Lady of Liberty Hall. 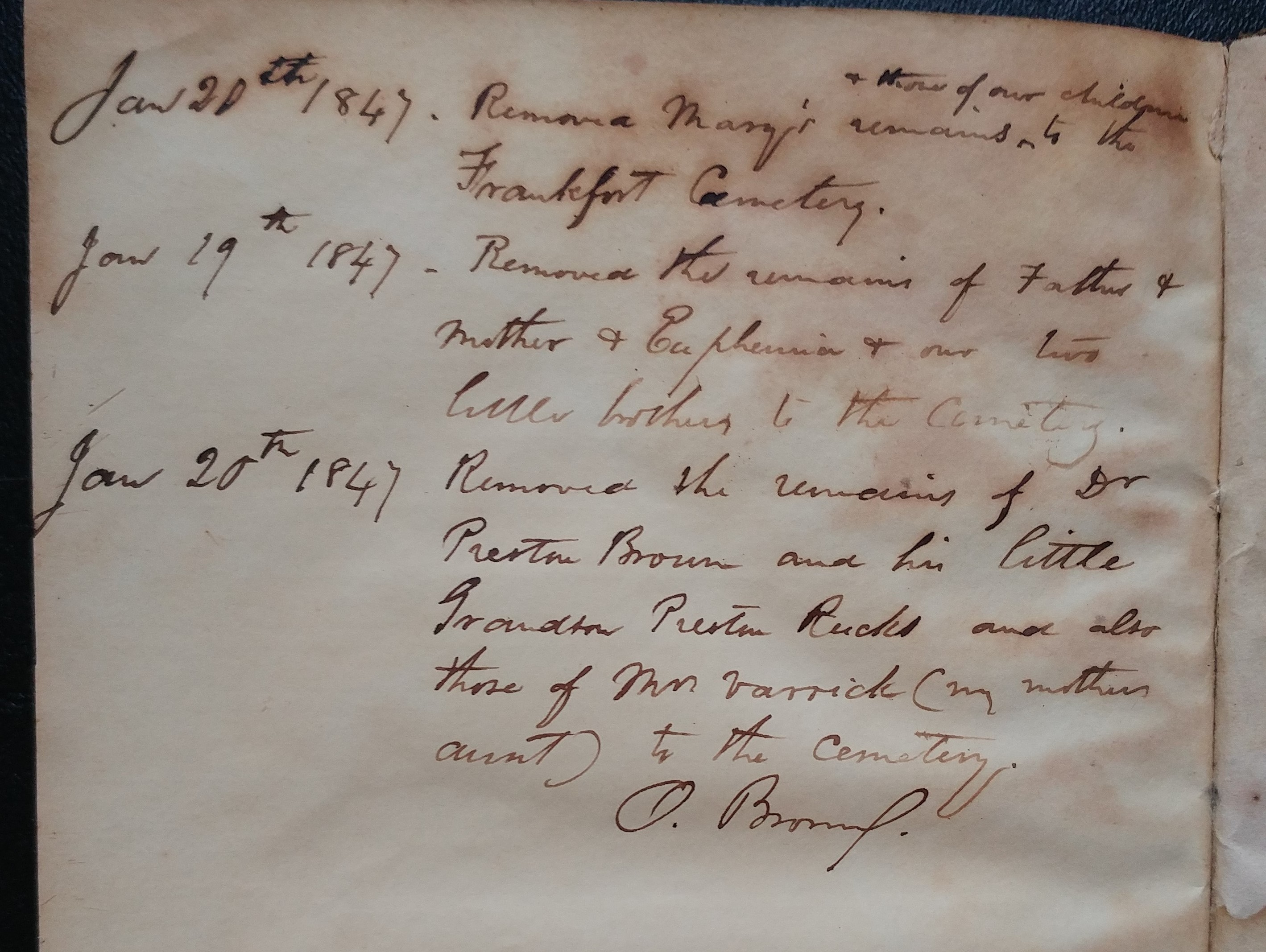 Orlando Brown's note about moving Mrs. Varick to the Frankfort Cemetery, 1847Mrs. Varick was thought to have been laid to rest in the family plot on the property, alongside several who’d gone before her.  After the establishment of the Frankfort cemetery, all the Brown family’s remains were moved there over a period of time—by 1847 according to family accounts.[v]  The grave markers that stand there today are inscribed with the names of many Brown family members, but Margaretta Varick’s is not among them, and the cemetery has no record of her burial.[vi]  We can speculate that dismay or confusion around the resting place of her remains could account for her wanderings.  Or perhaps it was the unfinished business of failing to reach her intended destination, which was to have been Illinois, where her son resided.  Her visit with Margaretta was to be a stop along the way.  She may have felt guilty – dare I say, mortified even – that rather than bringing comfort to her beloved niece, she had instead brought more grief and trouble to the family.

Though the truth may never be known to those on this side of the veil, her spirit has lingered in the area of the room where she departed this mortal realm, still trying to look after family 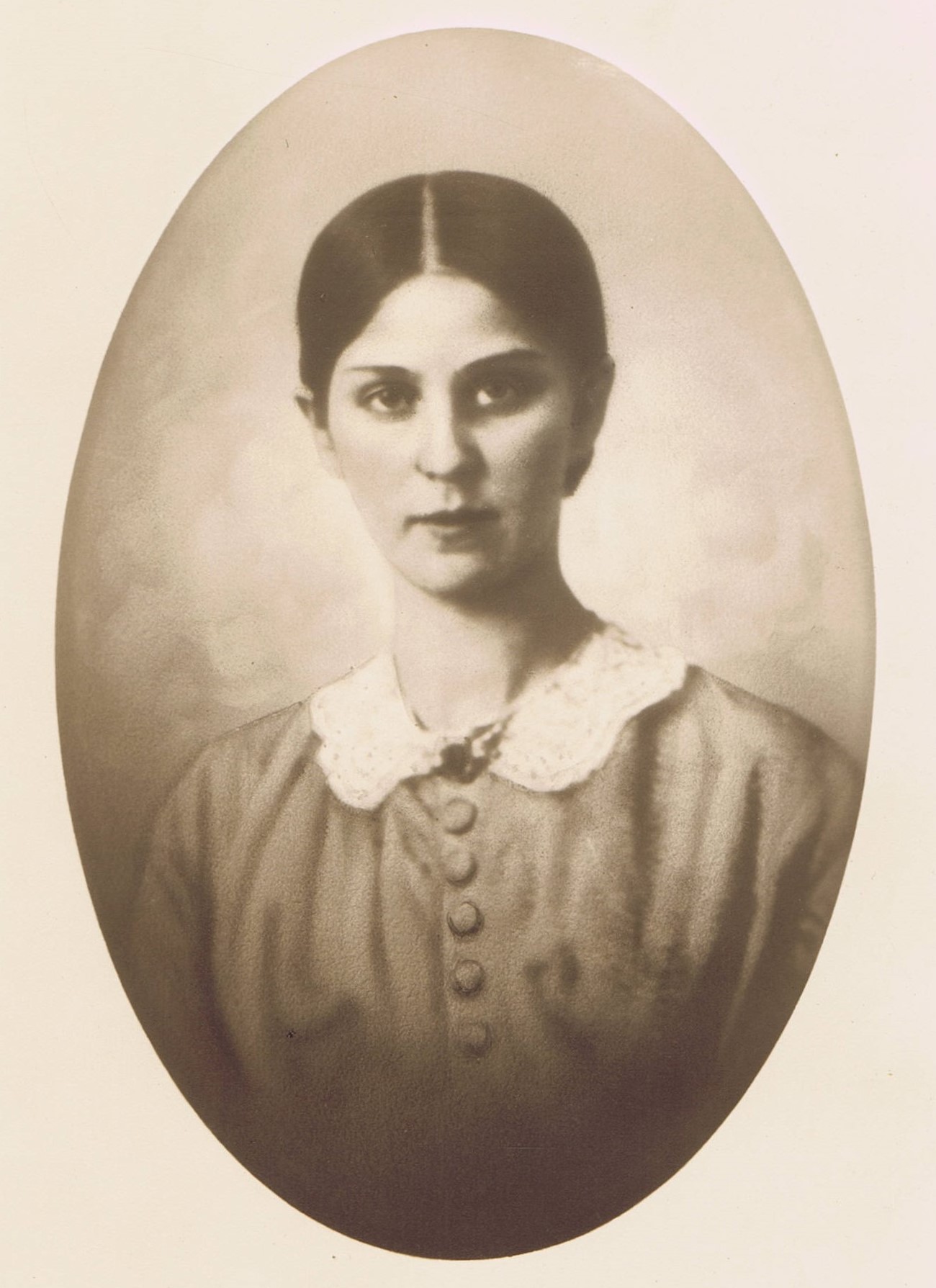 According to legend, the first post-mortem sighting is said to have been made by a new family member, the young bride (Mary Hanson Gunn) of John Brown’s grandson, Gratz, in the late 1820s.  She was staying in the bedroom where old Mrs. Varick had passed away and reported being astonished at the sight of a gray figure, who walked silently across the floor of the room before disappearing.[vii]  Gratz’s sister, another Margaretta, told of seeing the spirit as well, in the hallway near the haunted bedroom.[viii] 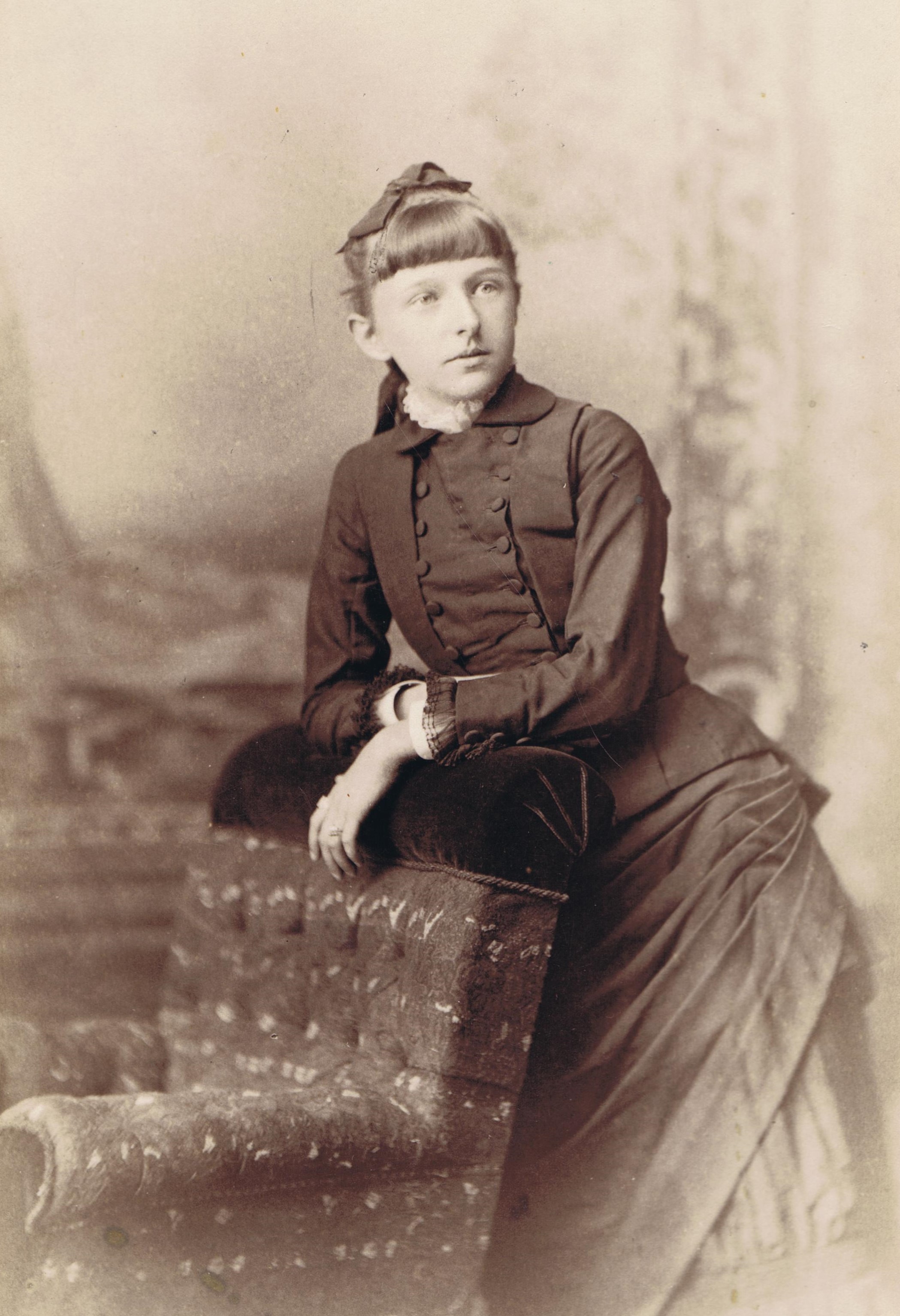 Mary Mason "Mame" Scott, ca. 1885, Liberty Hall Historic Site CollectionsPerhaps the most well-known tale of the Gray Lady’s visitations occurred in the 1880s, again in the room so briefly occupied by her in life.  As a young teenager, John Brown’s great granddaughter, Mary Mason Scott, known as Mame, was staying in the home, having just returned from boarding school in New York.  She settled into bed and fell asleep but was awoken in the night by a rustling sound.  She saw a tall apparition, veiled in gray, by the bed, leaning toward her.  Surprised, she reached out to the figure, but her hand passed through it, and it disappeared.  She screamed in confusion, which brought frightened family members rushing to her chamber, bearing a fireplace poker and a shotgun, imagining a more corporeal intruder perhaps.[ix]

Mame’s experience seemed to have been passed off by the family, but for her, it would reoccur the following two nights, causing her to believe that the phantasm was more than a dream or imagining.  It was unsettling enough that she asked to be moved to one of the other bedrooms.  The rest of the family, at the time, did not seem to believe that what she had seen was a ghost, but that there was some unknown, natural explanation.  It would be sometime later, when sharing her experience with a family friend that she learned of the suspicions about old Mrs. Varick’s spirit haunting the home.[x]  So Mame learned that she was not the first to see the ghost who would come to be known as the Gray Lady.  She certainly wouldn’t be the last.

As it was, the event seemed to leave a lasting impression upon Mame. After she inherited Liberty Hall as an adult, several contemporaries recalled that she would give palm readings and was thought to hold séances within the walls of the storied mansion.[xi]  However, if Mame did have further encounters with spirits, she did not record them for posterity.  She did often recount her experience with Old Aunt Varick and referred to her as “our beloved ghost” in one letter, regarding her as a benevolent presence.[xii]

Mame would be the last family member to live in the home, joining the dearly departed in 1934.  It was she who had the foresight to ensure that Liberty Hall would be preserved as a museum, due to the historic importance of her family, and the structure itself.  She was a member of the National Society of The Colonial Dames in The Commonwealth of Kentucky, to whom the house was sold, and who are the caretakers of the property to this day.